Cycling the Camino, one of the oldest pilgrimage routes

Cycling the Camino, one of the oldest pilgrimage routes

Cycling the Camino de Santiago, one of the World’s oldest pilgrimage routes

Why are there so many Caminos de Santiago?

According to legend, the apostle Saint James the Great brought Christianity to the Iberian Peninsula. In 44 AD, he was beheaded in Jerusalem. His remains were later brought back to Galicia (Spain). Following Roman persecutions of Spanish Christians, his tomb was abandoned in the 3rd century.

Saint James tomb was rediscovered in 814AD by the hermit Pelagius, after he witnessed strange lights in the night sky. The king ordered the construction of a chapel on the site. Legend has it that the king was the first pilgrim to this shrine.

Construction of the present Santiago de Compostela cathedral began in 1075; it was expanded and embellished with additions in the 16th, 17th and 18th centuries.

Since its discovery (9th century) and over the years there was a gradual development of this major place of pilgrimage. People started off from different places depending on their origin.

Over the centuries different ways were covered and followed by all kinds of people whose aim was to get to the place where the remains of the saint were buried. These people were moved by their faith and belief and they always tried to follow the shortest way to the city of Santiago de Compostela.

With the passage of time the ways were naturally defined as the result of several pilgrimages. As we get closer to the destination, the different ways converge into the shortest way to Santiago de Compostela. 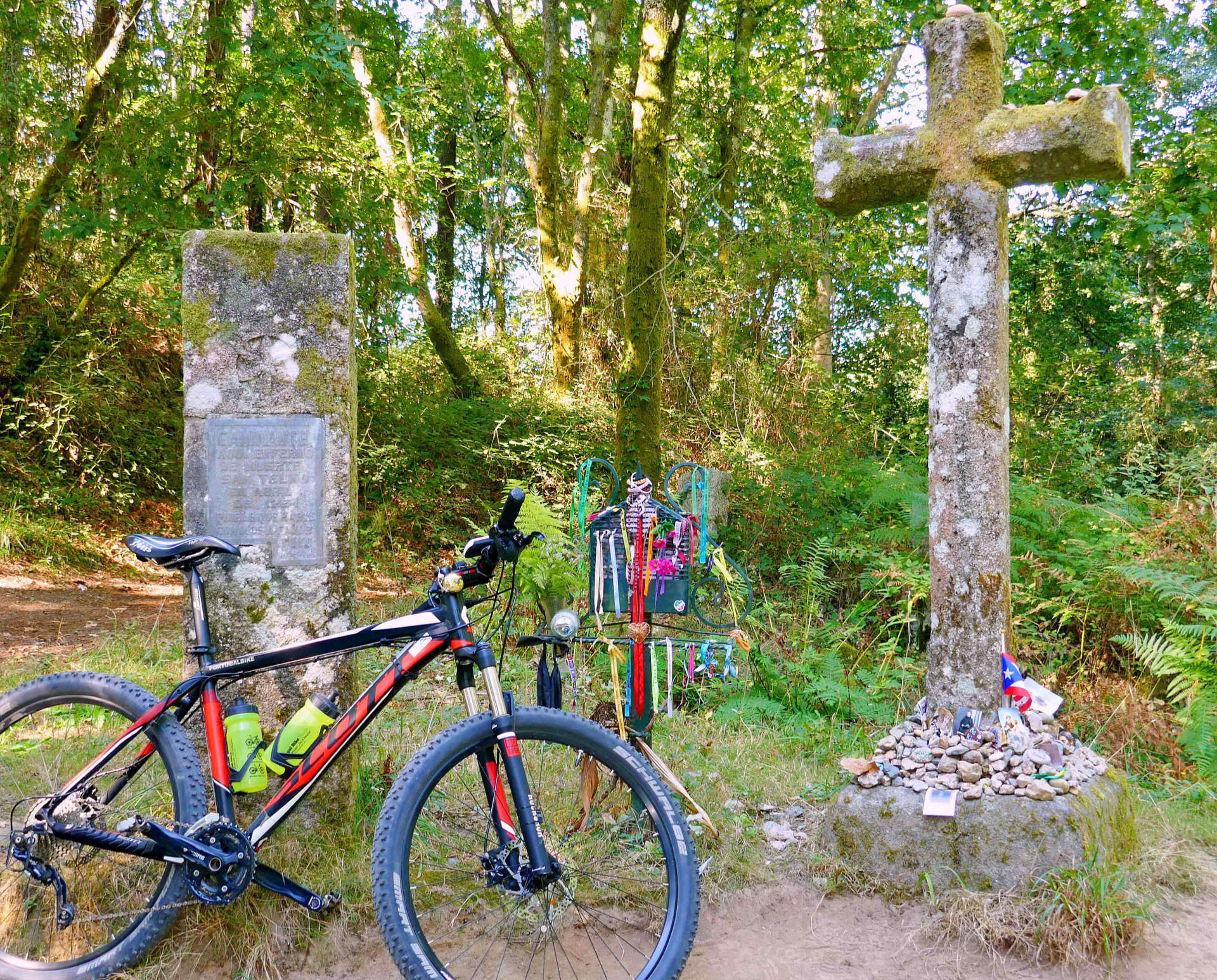 Nowadays thousands of people go to Santiago de Compostela every year. Some go moved by Faith, but many more go just because they want to do it; these people are moved by tourism and cultural reasons, therefore they want to experience the different Ways and this gives them inner pleasure and personal satisfaction.

At Portugal Bike Tours we follow the Portuguese Way. This also has some variations, such as: the Coastal Way, the Medieval Way, the Central Way and the Royal Way; each of these are different in terms of difficulty and length. We follow the Coastal Way with the Medieval Way, because being the shortest way it is the less difficult and also the most scenic and beautiful.

Our bike tour Cycling The Camino de Santiago is a 7-day stunning tour from Porto through seaside Atlantic villages until we get to the Spanish border. Then we continue along the Medieval Way, through ancient Roman roads, dense woods and centuries old trails en route to Santiago de Compostela. 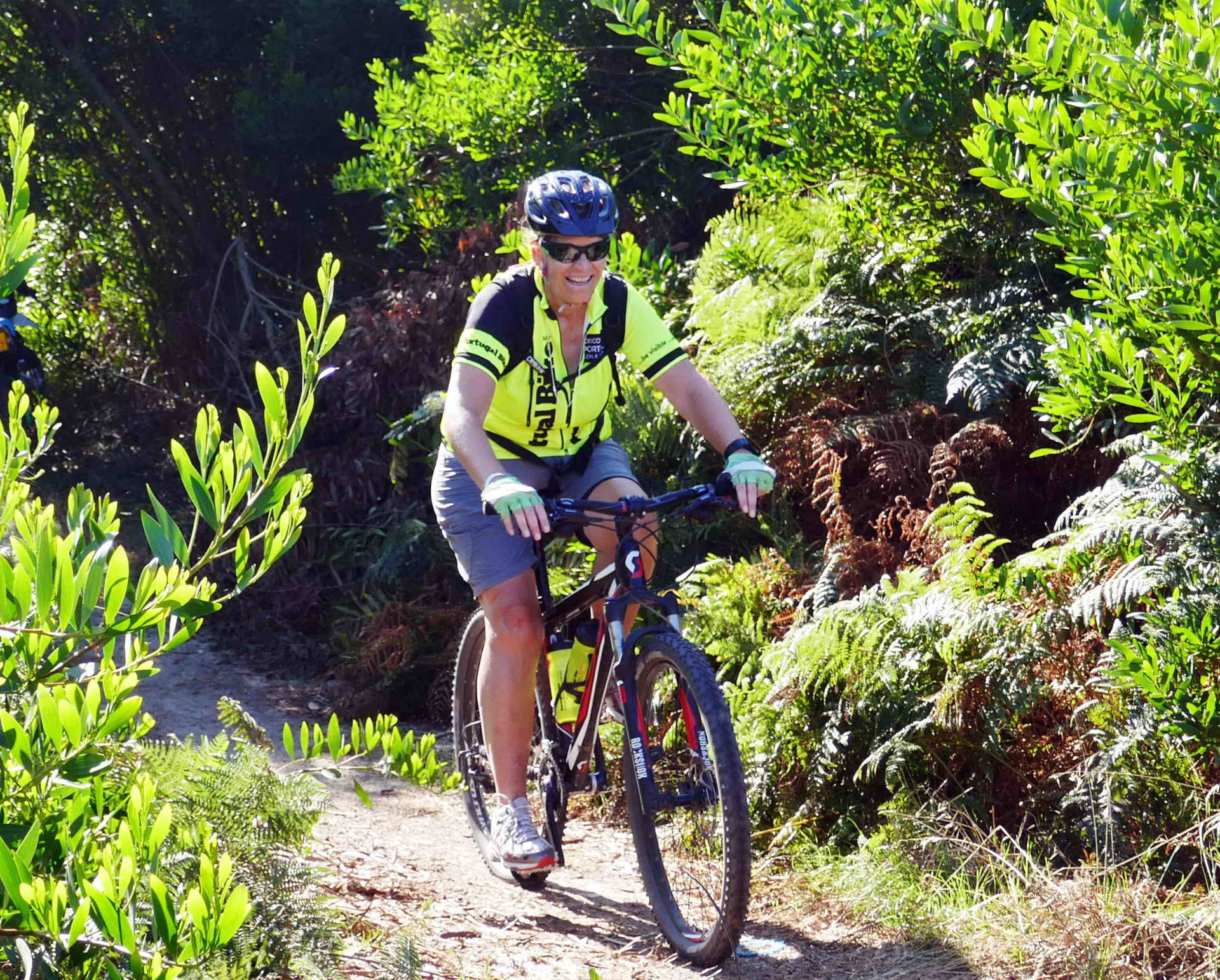 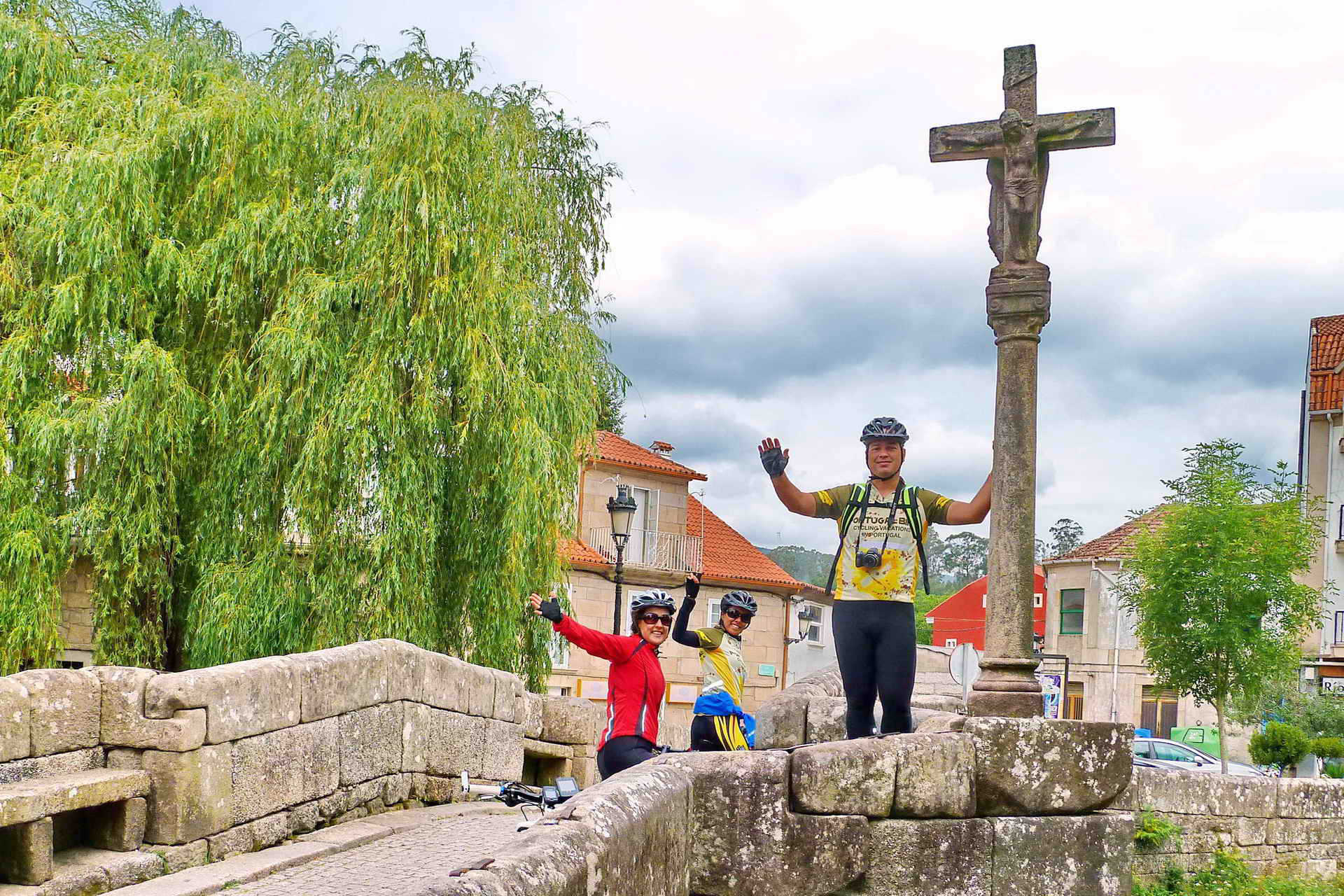 What is The Camino de Santiago?

No matter where you start, The Way of Saint James is a magical way, full of Positive Energy, Hope and Humanity. When you finish such an adventure, you see the world differently, you feel admiration and respect. It is something that you keep in your heart and often it transforms your inner self.

I have already done the Portuguese Camino de Santiago more than 15 times and I don’t get tired of it; moreover, I am always willing to do it again! Why? …I don’t know, …but it is magical to me and it gives me Power and Inner Strength, …it is something transcendental that I cannot explain. …Call me …and I will always go! …But this is a very personal feeling and I understand that other people may feel it differently …or not.

The Camino de Santiago de Compostela is usually well marked along the way. Sometimes it is hard to follow when you have to cross a busy city. However, it doesn’t matter if you follow all the arrows; the main purpose is to get to Santiago city following the fastest and shortest way. 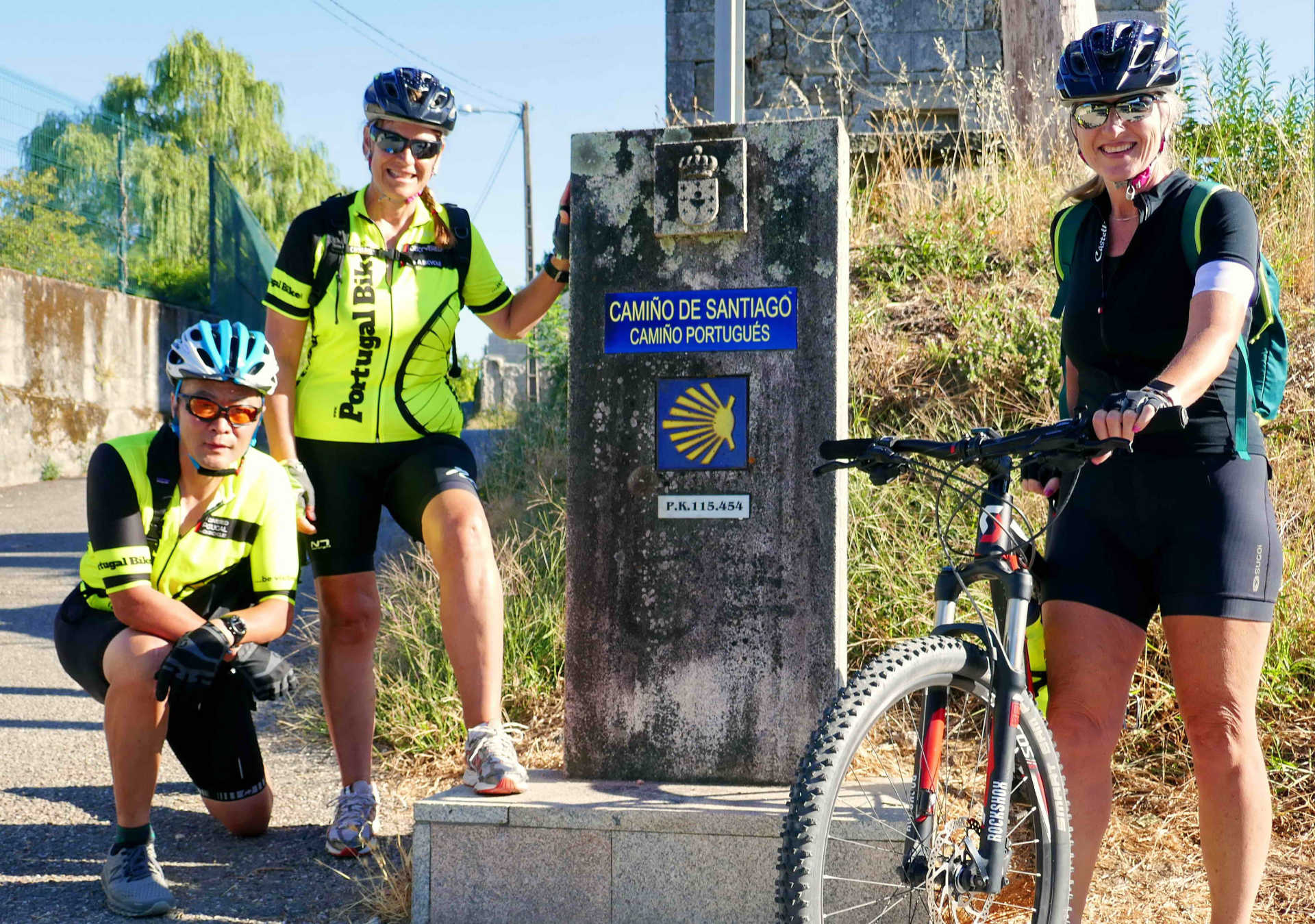 The only purpose of the yellow arrows that we meet along the way is to help us and direct our way, so that we don’t get lost. You don’t have to follow ALL the arrows to do the Way. When you say “the Way”, you don’t refer to the road or the trail that is marked; you refer to the actual action of going to Santiago de Compostela. This is the real Camino. The Camino is not physical, The Camino is a way to our inner self. And not everybody can do it and for all sorts of reasons.

And when I get to Santiago de Compostela? The Pilgrim’s Credential for cycling The Camino!

To complete this adventure (for religious reasons or not) you should previously get the Pilgrim’s Credential (Portugal Bike Tours will get this for you). A pilgrim must get at least two stamps per day; you collect the stamps along the way at the hotels, restaurants, churches, etc. And when you get to Santiago de Compostela you go to the Pilgrim’s Office and show your Credential with all the stamps to prove that you did cycle The Camino (minimum of 200km biking). Consequently, they give you the Compostela, this is a document with your name written in Latin that certifies that you completed The Camino de Santiago. 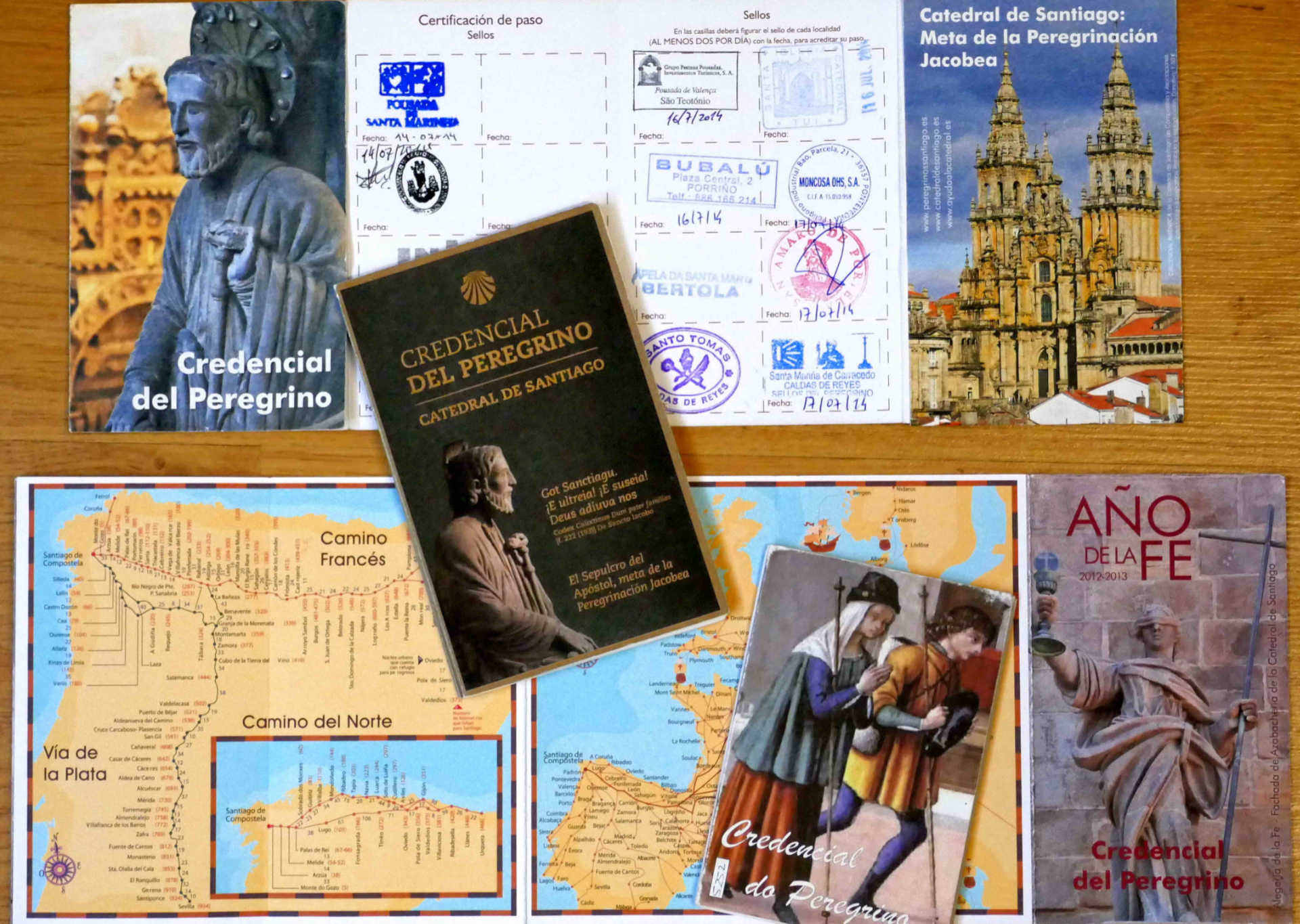 Cycling the Camino de Santiago? Use a bike with wider tyres!

If you wish to cycle The Camino de Santiago, you should always use a mountain bike or a hybrid bike with wider tyres! Thicker tires have better grip and they will help you to get the necessary comfort and balance when you have to cross Roman bridges that are more than 2000 years old, old trails and medieval paths, and all kinds of rough and irregular trails that make the connections to avoid the busy roads. This is the Way to Santiago de Compostela.

The Weather: best months for cycling The Camino

The northern areas of Portugal and Spain are a bit colder and rainier, hence the best season for cycling the Camino de Santiago is the end of Spring, Summer and the beginning of Autumn. Daily and weekly weather forecasts for Portugal can be searched at the Portuguese Weather Institute.

There is a well-known sentence that helps us to understand what really is The Camino de Santiago and it says something like this: “It is the Way itself that changes our lives, not the goal”, i.e. it is by doing The Camino (walking or cycling) and overcoming all the daily difficulties that our inner self is changed, and not the fact that you get to the city of Santiago de Compostela in Spain. …Doing The Camino is giving a bit of yourself …it is to surpass yourself! …It is something different, …it is really an experience!