Cycling the Camino de Santiago is a 7-day stunning tour from Vila do Conde (Porto region) through seaside Atlantic villages and sandy beaches, until we get to the Spanish border. Then we continue along the Medieval Way, through ancient Roman roads, medieval towns, dense woods and centuries old pilgrims’ footpaths en route to the UNESCO World Heritage Site of Santiago de Compostela.

To cycle The Camino de Santiago, you should use wider tires on your bicycle! We will ride sometimes on asphalt, other times on bike lanes, wood lanes along the beaches and some dirt roads, or even some single tracks or rough trails. Thicker tires have better grip and they will help you to get the necessary comfort and balance when you have to cross Roman bridges that are more than 2000 years old.

The overall difficulty level of this tour is 3, Intermediate (more precisely, level 2.6, between 1~5). It is recommended for “bikers” and “cyclists”. It is supposed that you are in good shape.

Available: You can sign up any date for a self-guided bike tour, but you must wait for our confirmation.

Confirmed: This date is already confirmed and you can also sign up.

Prices are based on a double bedroom occupancy (hotels may be different depending on availability) | Self-Guided version: We require a minimum of 2 people to confirm a Self-Guided departure | Groups: Discount for Groups of 4 or more people | E-Bike rental: + Euro 300 | On Self-Guided tours we can offer you any date, depending on our availability. If the tour starts and ends in different months/fortnight the price will be adjusted accordingly, depending on how many days in each month/fortnight. The price of festivity dates will be adjusted accordingly. 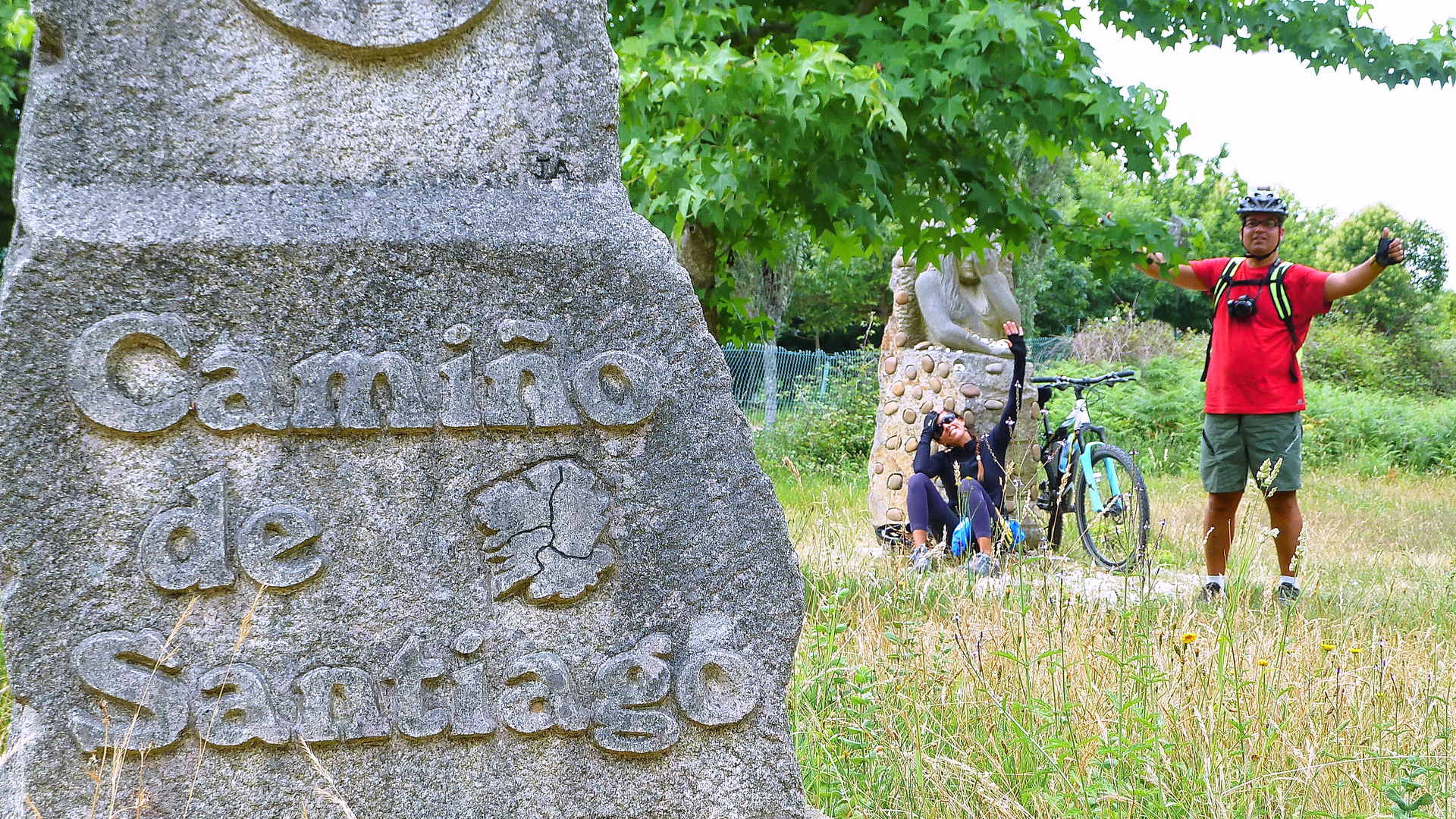 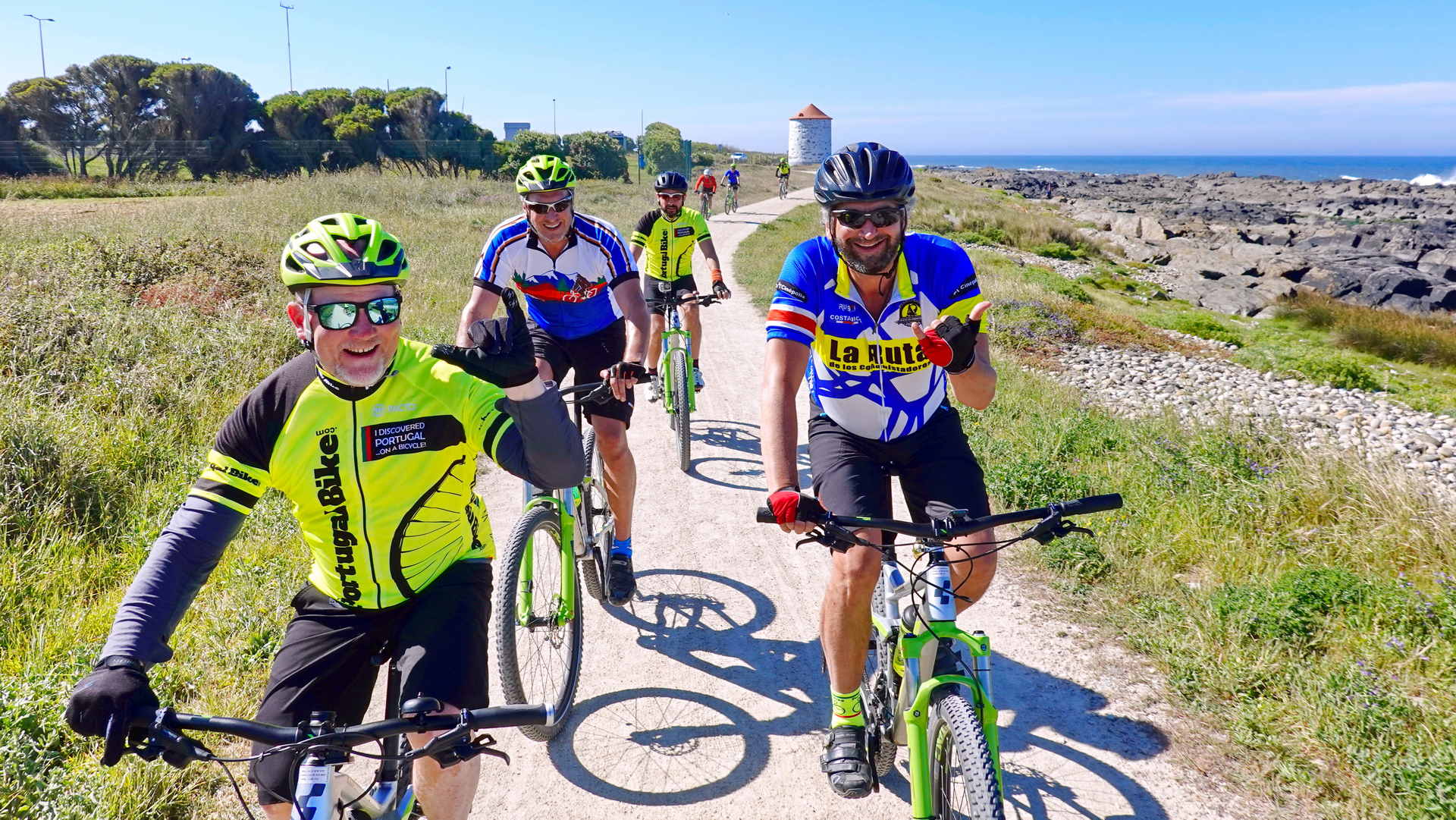 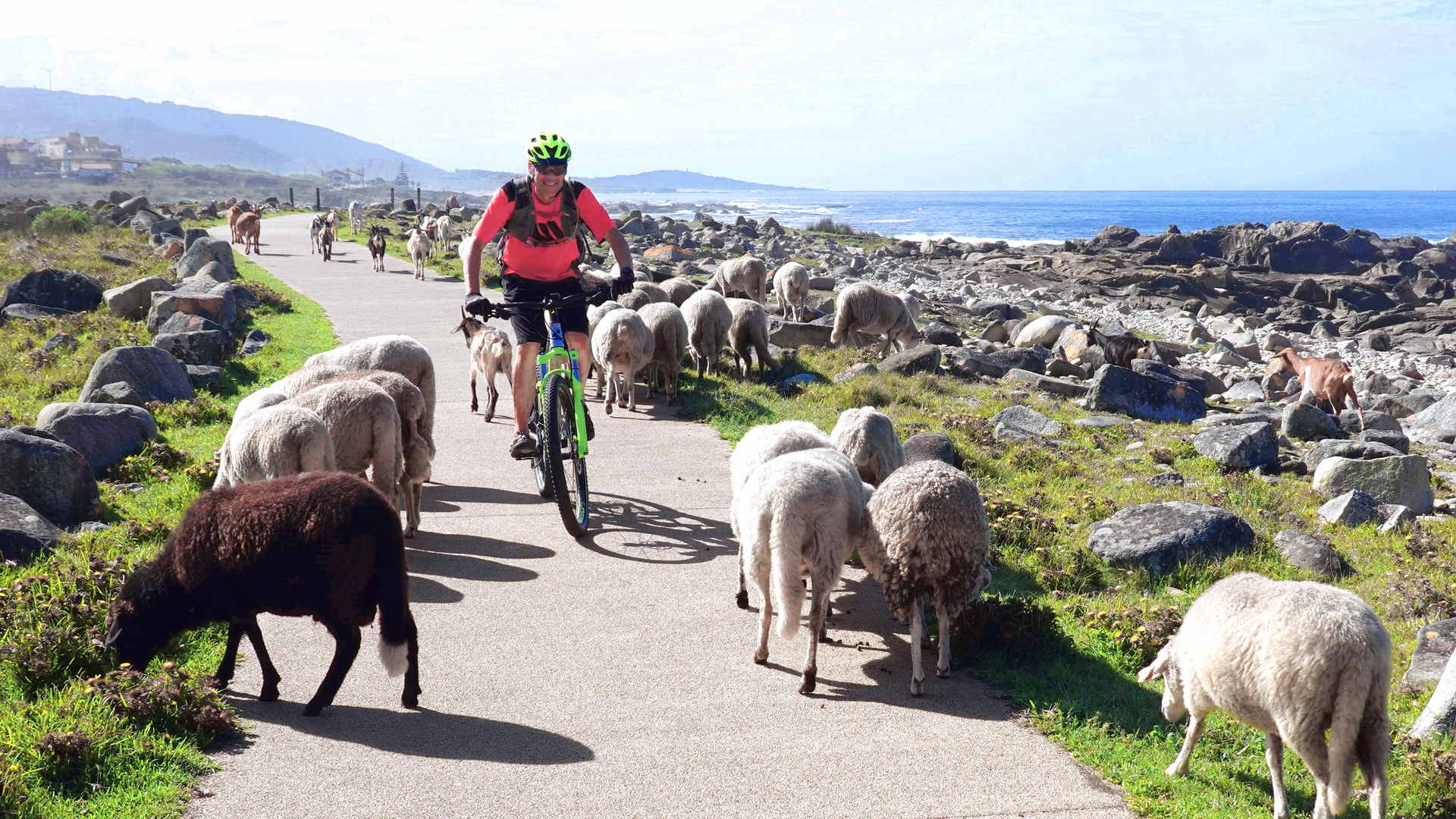 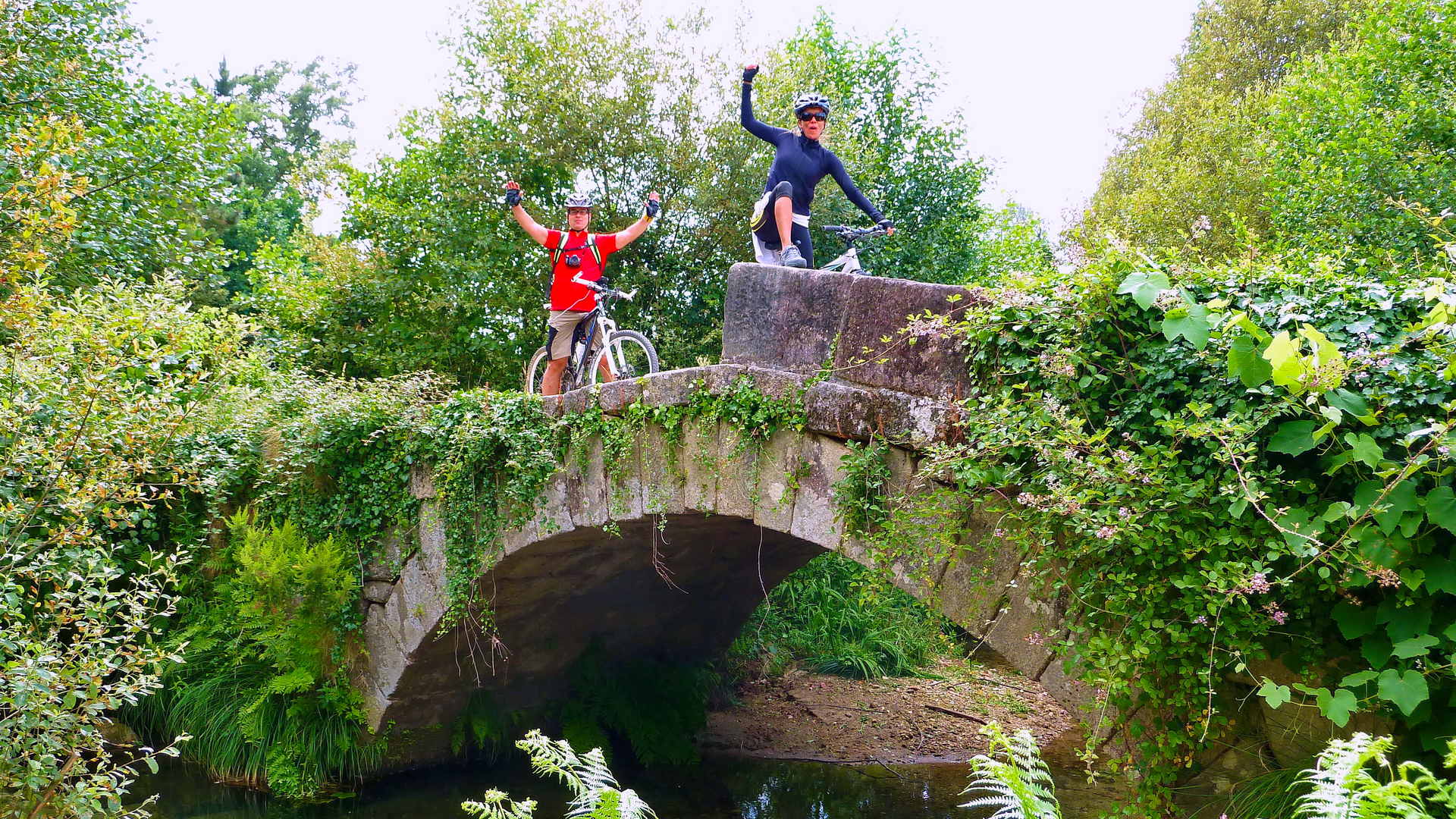 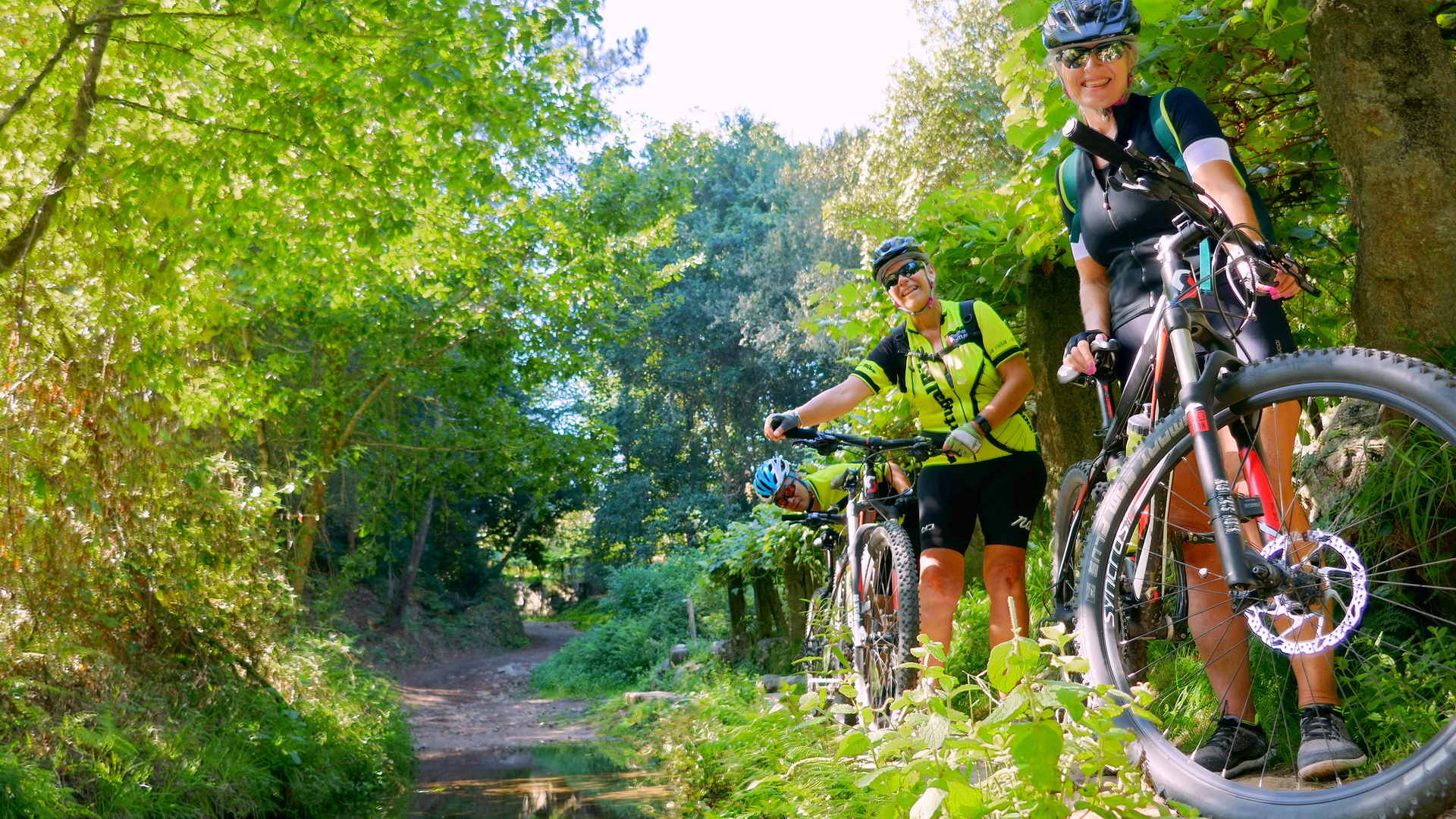 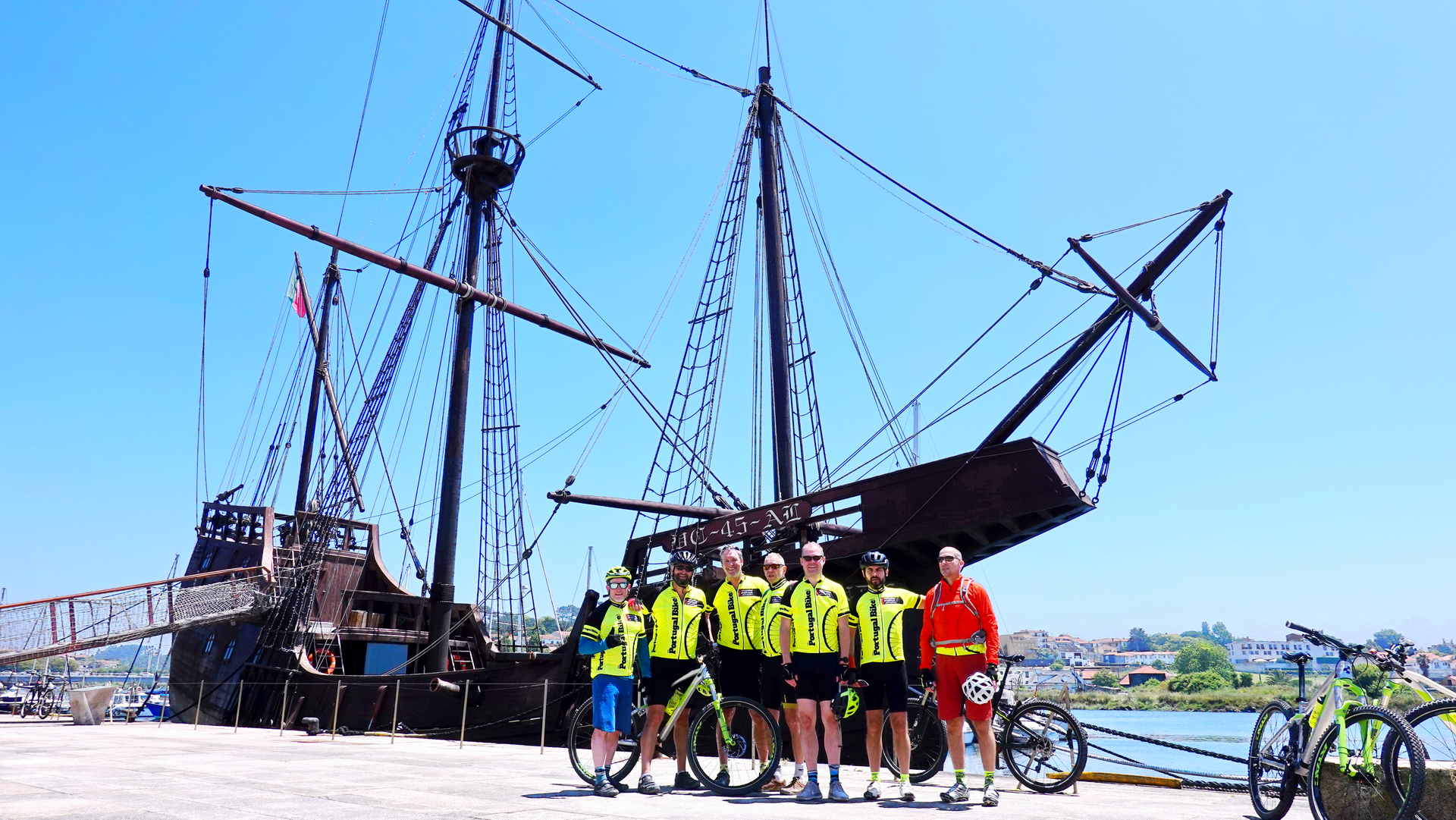 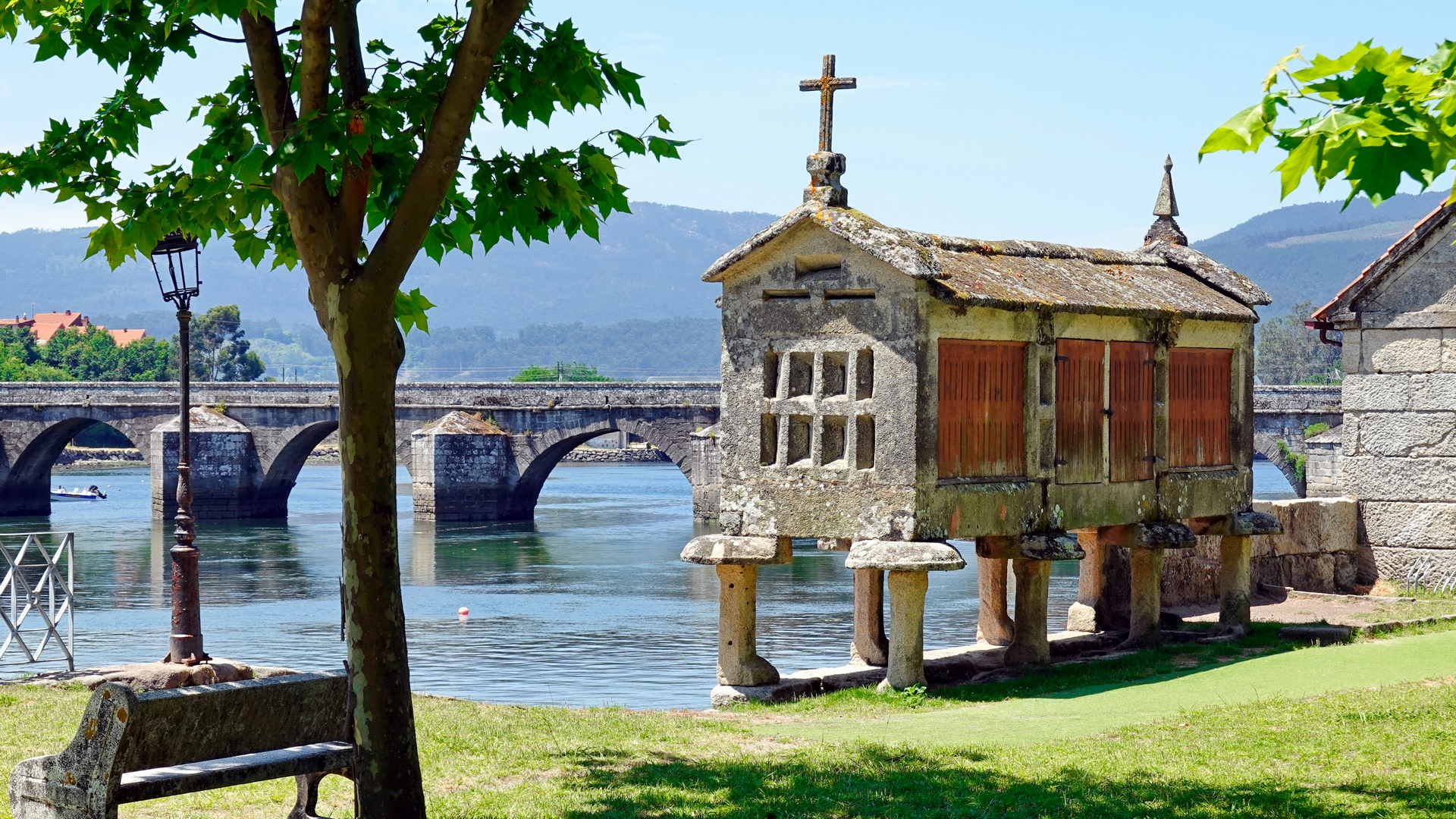 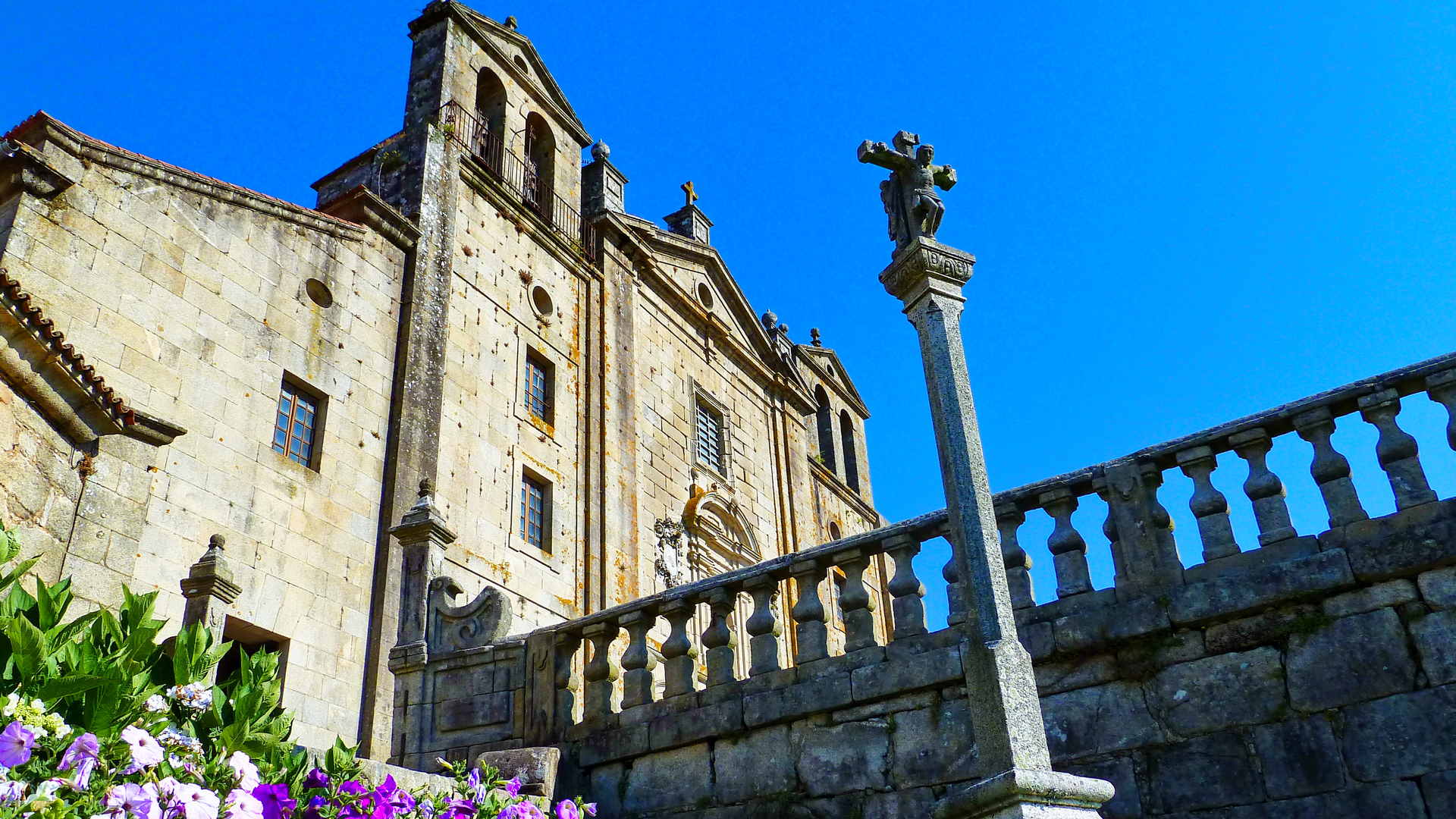 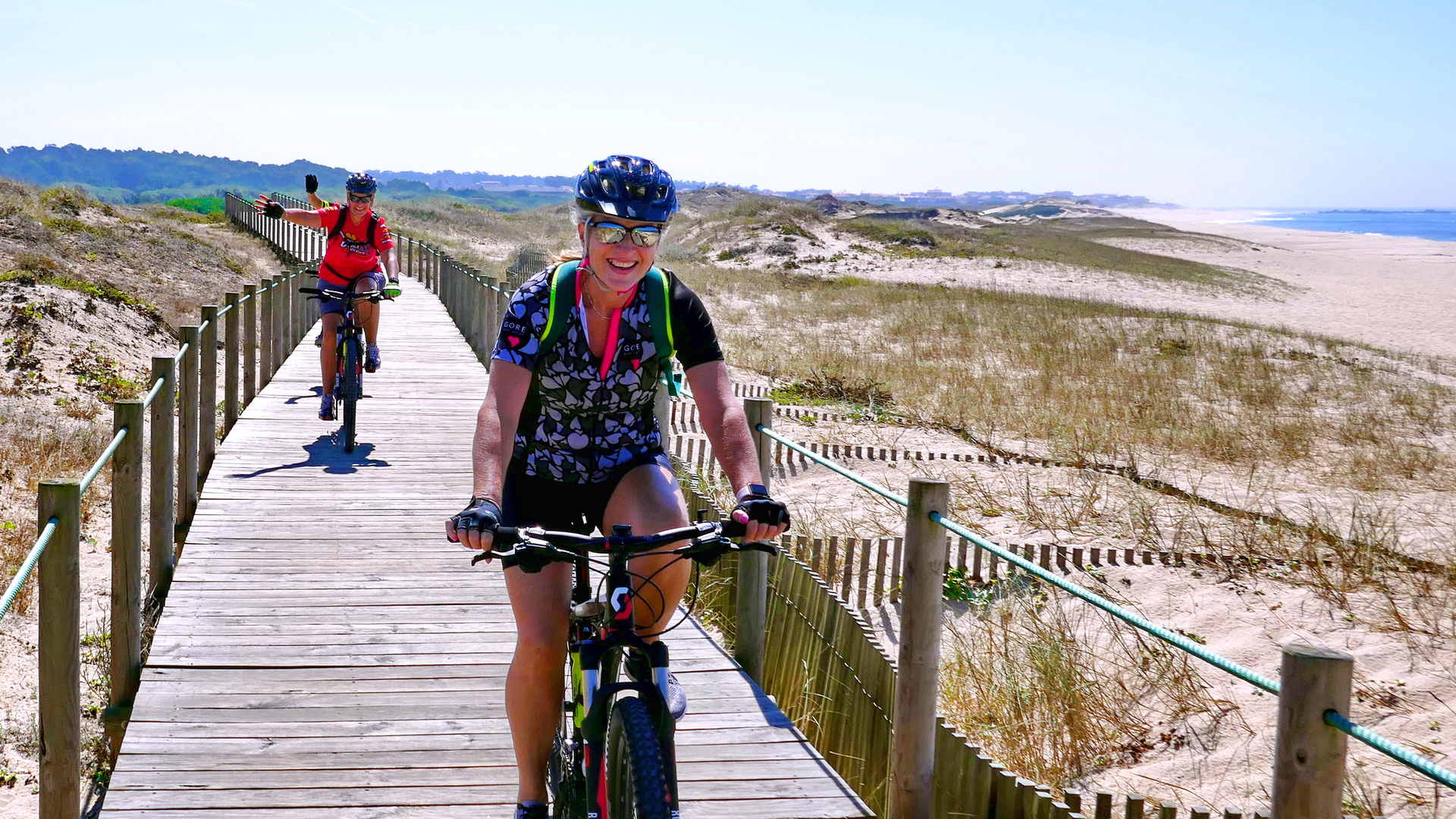 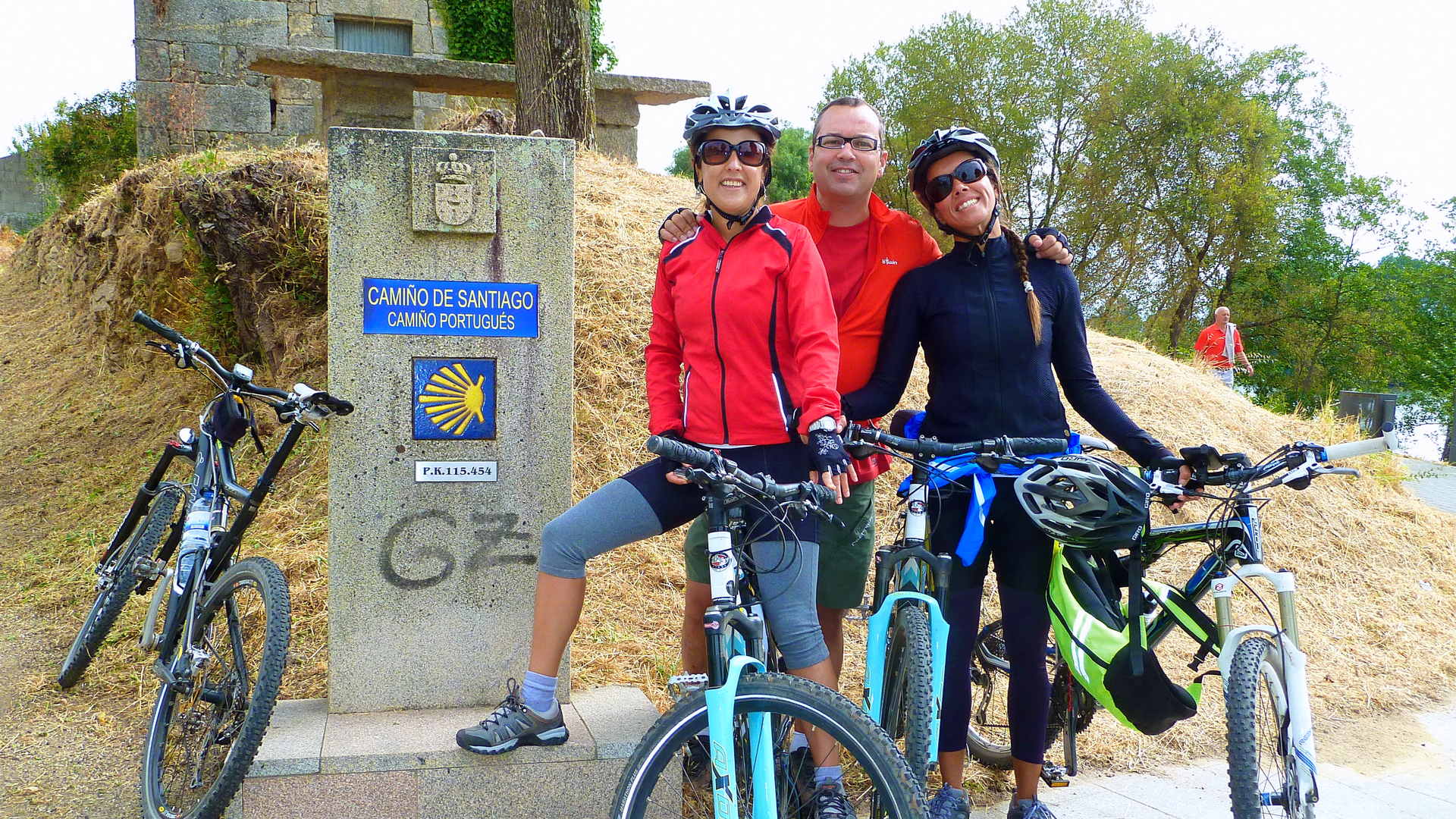 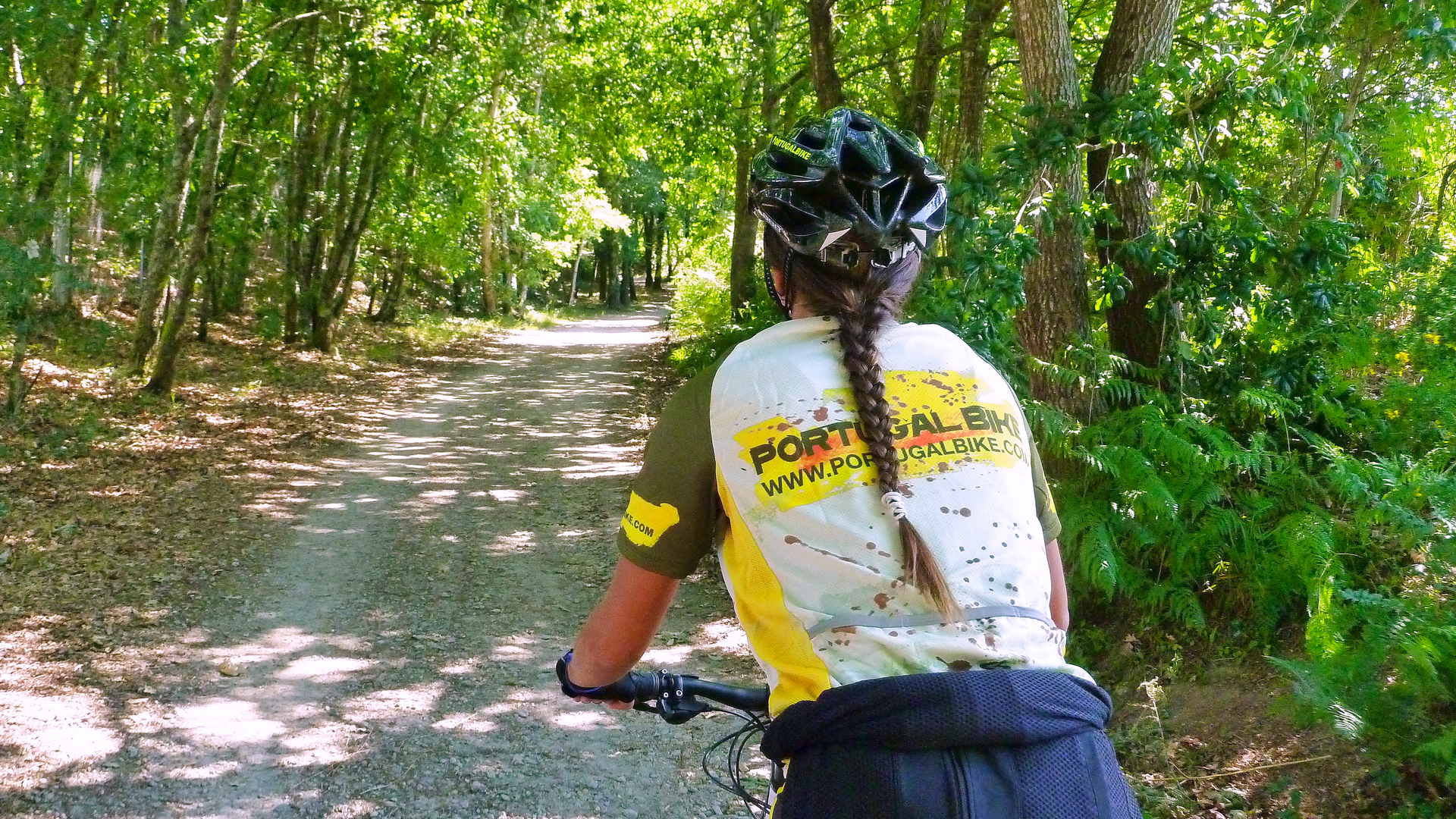 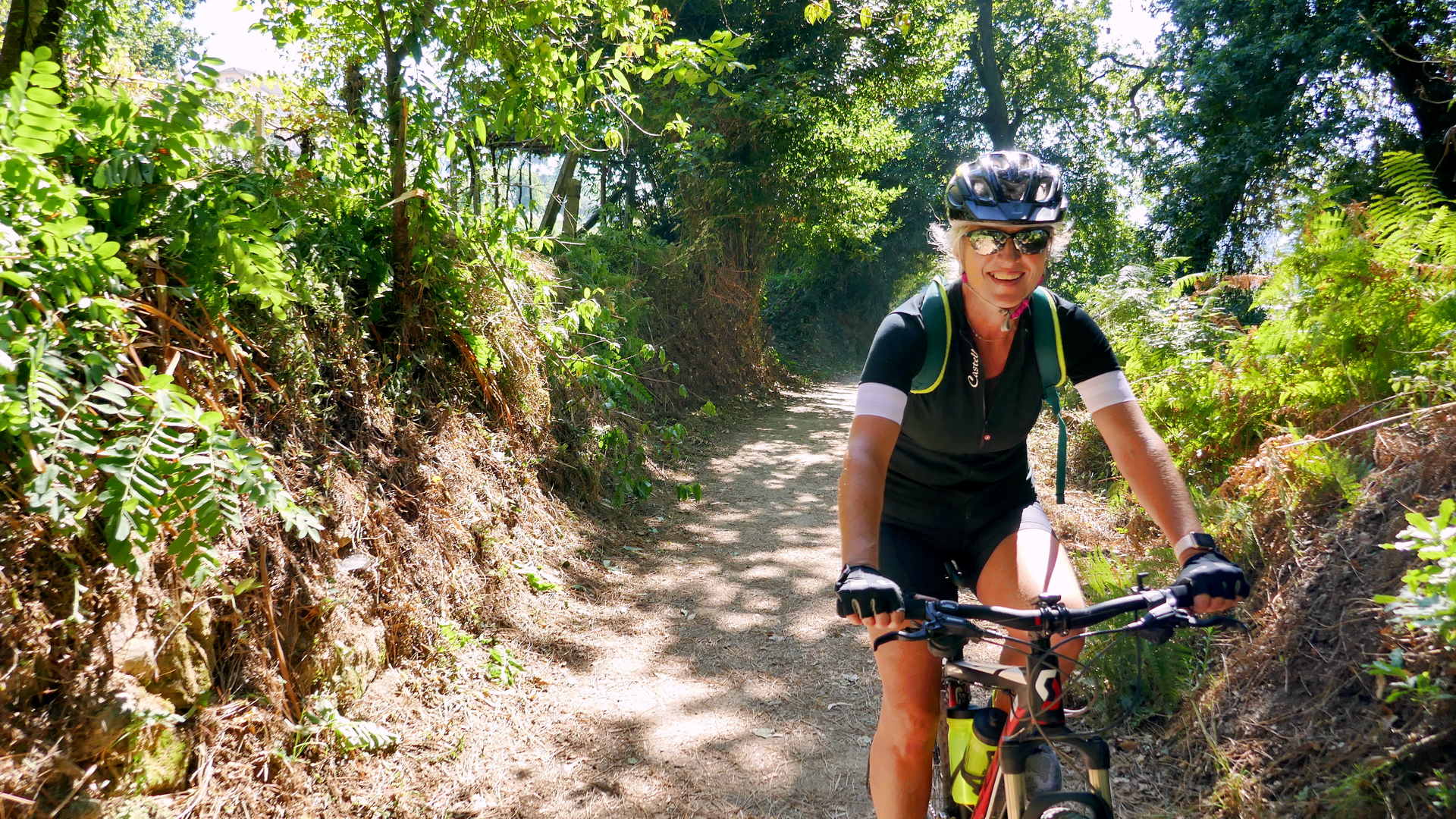 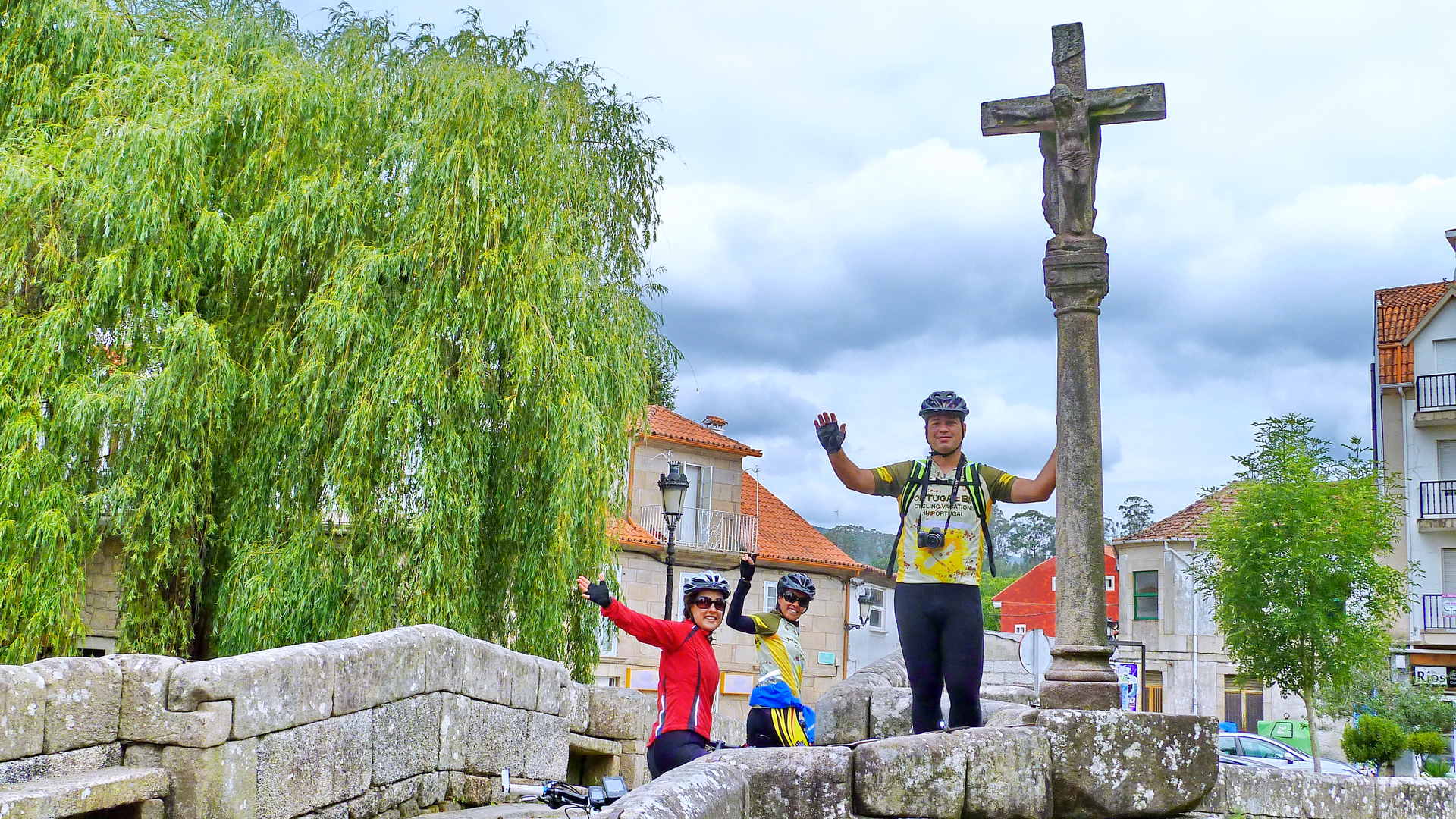 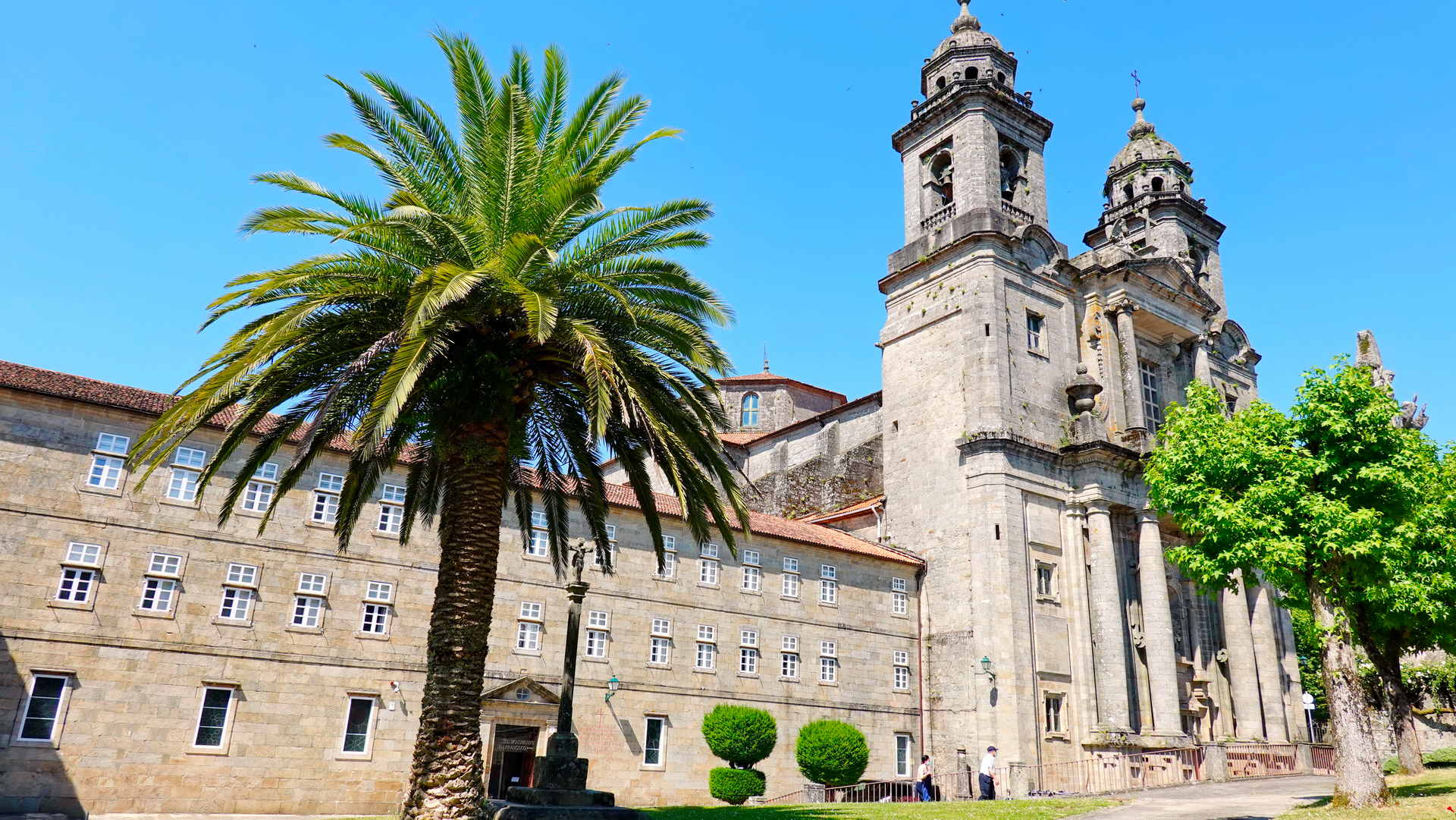 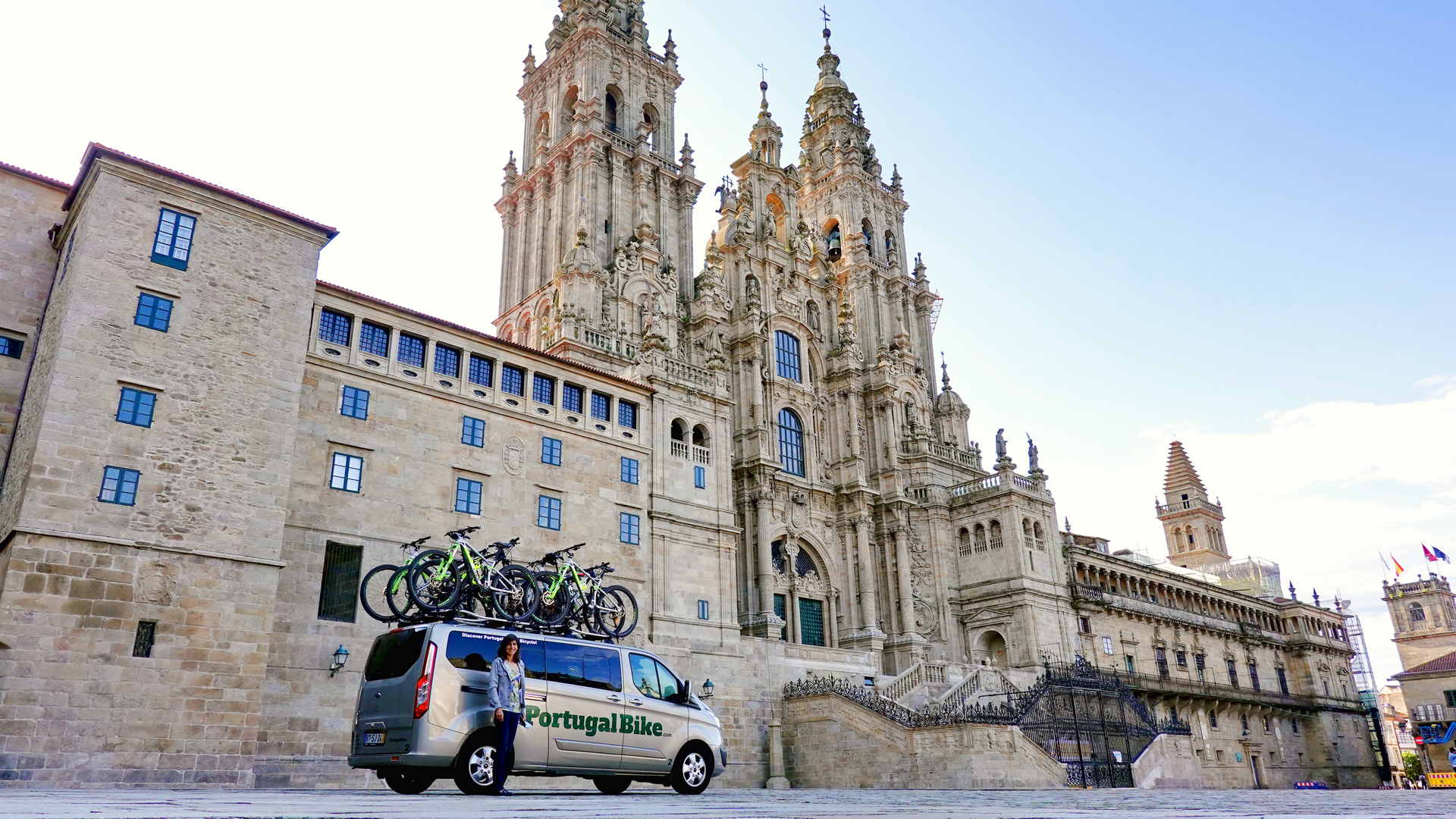 52km (32mi), 250m total climbing (820ft), level 2 (2.0). After breakfast you leave the ancient city following the ways covered by the pilgrims until you get to the historic town on the coast. Lodging in 4* hotel, a historic building from 16th century, in the historic center of this small town. Lodging in Casa Melo Alvim Hotel.

58km (36mi), 410m total climbing (1350ft), level 3 (2.8). After breakfast you continue riding along the Portuguese coast towards the Spanish border, but you spend the night in Portugal, in a beautiful medieval town near the border, which is protected by a fortress with double walls. Lodging in a Pousada which is set on the highest place of the old fortified area of this town, a 13th century Fortress, with a great view over Spain. Lodging in Pousada de Valença, Charming Hotel.

58km (36mi), 970m total climbing (3180ft), level 4 (3.8). After breakfast we finally cross the border. We continue along The Way and we will ride on some medieval paths until getting to the next town. Lodging in a Parador, a 16th century palace, near the historical and commercial center of the town. Lodging in Parador de Pontevedra  (or in Galicia Palace hotel).

41km (25mi), 600m total climbing (1970ft), level 3 (2.6). Breakfast. Before you get the next Spanish town you cross the thick woods with a luxuriant vegetation. Lodging in a 4* hotel with a swimming-pool; the building was built in the 16th century and it was the vacation house for the archbishops from Compostela. Lodging in Pazo de Lestrove, Monument Hotel.

26km (16mi), 560m total climbing (1840ft), level 2 (2.0). Breakfast. Finally, we get to Santiago de Compostela and we feel we accomplished our “mission”. Free afternoon to wander around this mystic city and do some shopping. Lodging in a beautiful 4* Historic Monument hotel, a former Convent from 13th Century, ideal to rest after this long ride and in the historical center of Santiago de Compostela. Lodging in San Francisco Monument Hotel. 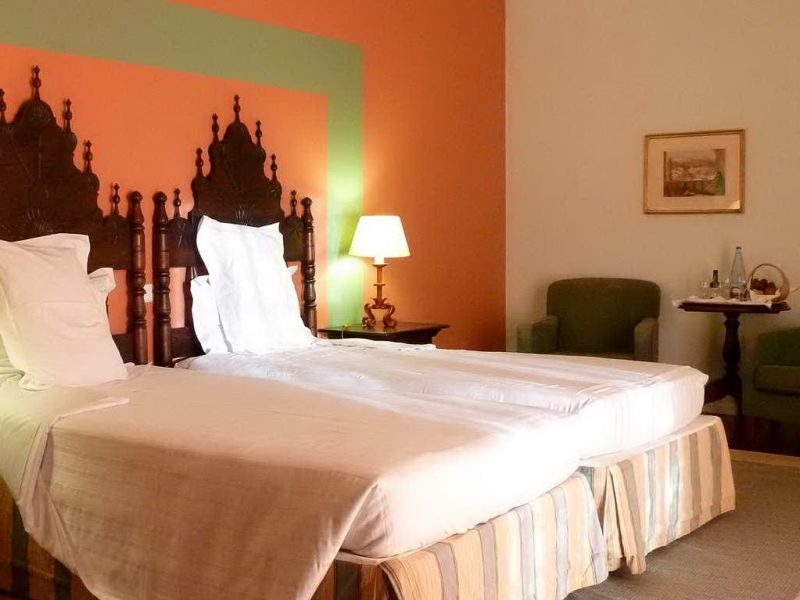 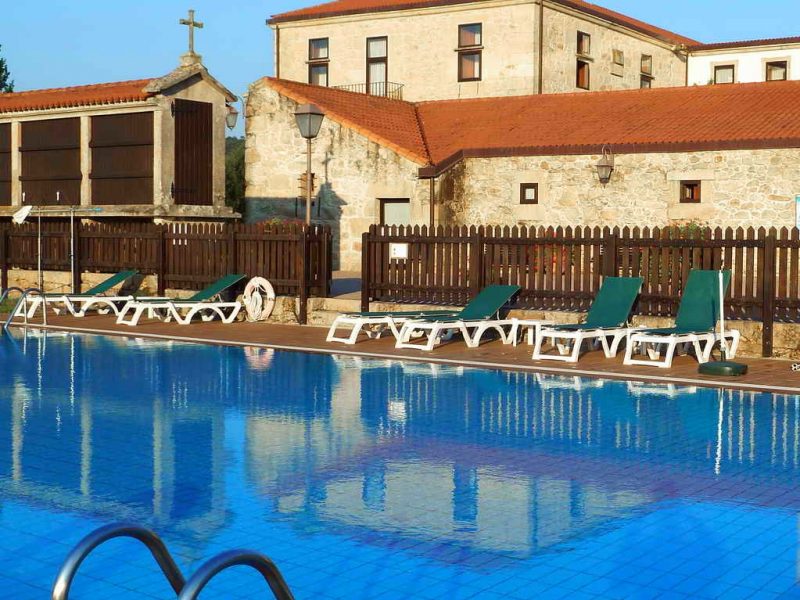 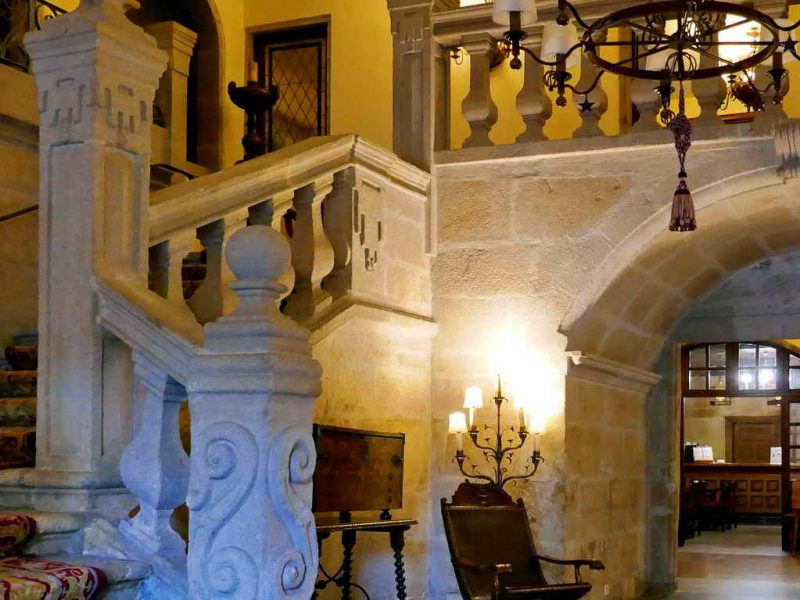 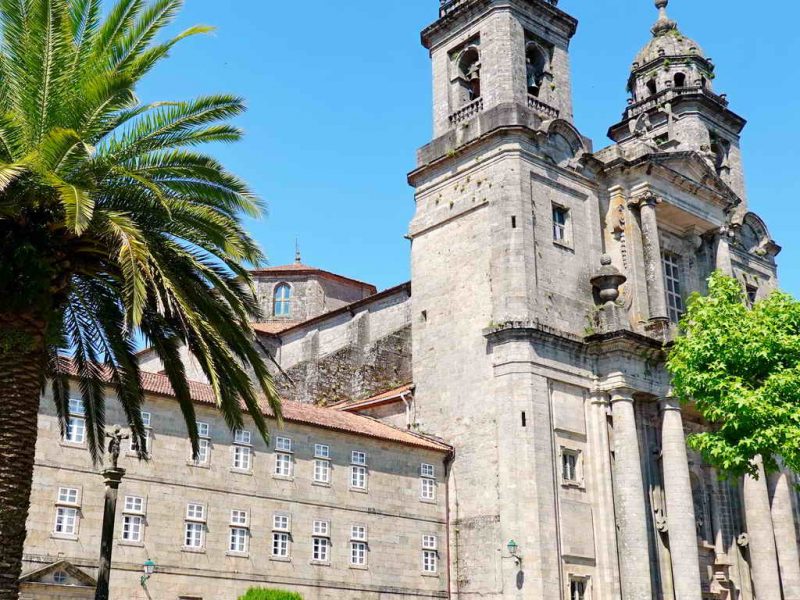 “Great outfitter for self-led tours: We used the wonderful people at Portugal Bike to ride the Camino route from Porto, Portugal to Santiago, Spain. They did an excellent job outfitting us with great equipment, advice, trail guidance, and hotels on our route. I highly recommend them and I expect I will use their excellent services again.”

“My wife and I did the northern mountain bike trip to Santiago a couple of weeks ago. We had an AWESOME time. Here’s a quick rundown:
1) Jose and Cristina are really the perfect guides. Both very friendly and very professional. Very knowledgeable about Portuguese history, culture etc… And Jose is a hell of a cyclist, to boot!
2) Really cool hotels. Obviously, these vary depending on the trip, but we stayed in 3 historic “pousadas,” which were amazing. We also had one awesome new, modern hotel along the way.
3) Some wonderful food. With one exception, all the restaurants they selected were excellent. We had a lot of authentic, tasty Portuguese dishes.
4) Beautiful, challenging, rewarding biking. My wife and I are both in good shape, but neither of us is an experienced cyclist. Jose did a great job of encouraging us and helping us out without being condescending or unnecessarily demanding. We both felt exhilarated at the end of our 220+ km journey!
All in all, this was a splurge for us, but one that we will absolutely remember for the rest of our lives! “

“We did the tour Camino de Santiago de Compostela. This was an excellent adventure that took us along trails with an unimaginable history for those that come from tropical lands. The landscape is completely different from what we can see in Brazil. We were able to experience some of the situations described in the pilgrims’ reports. The pleasant company of the gods, the amazing discovery of the cultural “differences and similarities” between Brazil and Portugal, softened the weariness, the heat during the climbs and the rocks along the way. Everything was very well organized, first class equipment and car, very comfortable hotels; we enjoyed the ride, the food, the landscape and the historic monuments. We thank PortugalBike Team very much.”

“Cycling to Santiago de Compostela was a unique experience. These 2 Brazilian women that were not very well prepared for such a big adventure got to the end with a great satisfaction. The tour was very well organized, with gorgeous views, and wonderful food showing a very rich gastronomy. The guides were very thoughtful, nice and competent conveying a great feeling of safety. We highly recommend this tour and we plan to come back and do other tours with Portugal Bike tours.”

Sporster 20 Solution emphasizes comfort and convenience for touring and transportation. Equipped with a lockout fork and Syncros components, the Sportster is set up perfectly for your excursions with a more vertical and comfortable position. On this mixed surfaces bike tour you will ride with wider tires (28″x 2.15).

Now you don’t have any excuse for not participating on a Portugal Bike Tour! Don’t be afraid of not being able to keep up with the group. Now you can ride an e-bike without feeling too exhausted! The more you pedal, the more electric assistance you have. On this mixed surfaces bike tour you will ride with wider tires (28″x 2.15).