This Portugal Bike Tour in Portugal begins in Fatima, the most sacred place in Portugal. This is the place where it is said that Our Lady appeared to three children while they were herding their sheep in 1917. Since then it is a world-known pilgrimage place that was visited several times by more than one Pope. Every year thousands and thousands of pilgrims from all over the World visit to this Sanctuary.

You will see several castles (Leiria, Porto de Mós and Óbidos castles) and two impressive Monasteries. You will ride along the sea, admiring the beautiful and well preserved long Atlantic coast known by the Silver Coast, and you will ride along agrarian fields with different crops and different colors.

You will cycle towards the most typical beach in Portugal. This is a place full of old traditions and today we can still see fishermen drying fish under the sun as they did in the past.

One of the highlights of this bicycle tour in Portugal is the most-well preserved medieval town in Portugal. Originally a Roman village, it was taken from the Moors in 1148. Its castle is classified as a national monument and it is a perfect example of a medieval fortress. This is a “village-museum”, perfectly preserved and walled by its high walls which perpetuate its medieval character.

On the last day you will get to Peniche, a place of fishing traditions. You will ride towards Cape Carvoeiro admiring a beautiful scenery along the sea. Here the wind and the sea work together making the most interesting shapes of the rocks.

Available: You can sign up for the bicycle tour, but we must have a minimum of 4 cyclists.

Confirmed: We already have a minimum of 4 cyclists on the bicycle tour and you can still sign up.

Prices are based on a double bedroom occupancy (hotels may be different depending on availability) | Supported version: We require a minimum of 4 people to confirm a supported departure | Groups: Discount for Groups of 4 or more people | Longer tour: You can join two PortugalBike Tours and have a 2-week program (10% discount on the second tour) | E-Bike rental: + Euro 250 | On Supported tours we can offer you any date, depending on our availability. If the tour starts and ends in different months/fortnight the price will be adjusted accordingly, depending on how many days in each month/fortnight. The price on festivity dates will be adjusted accordingly. 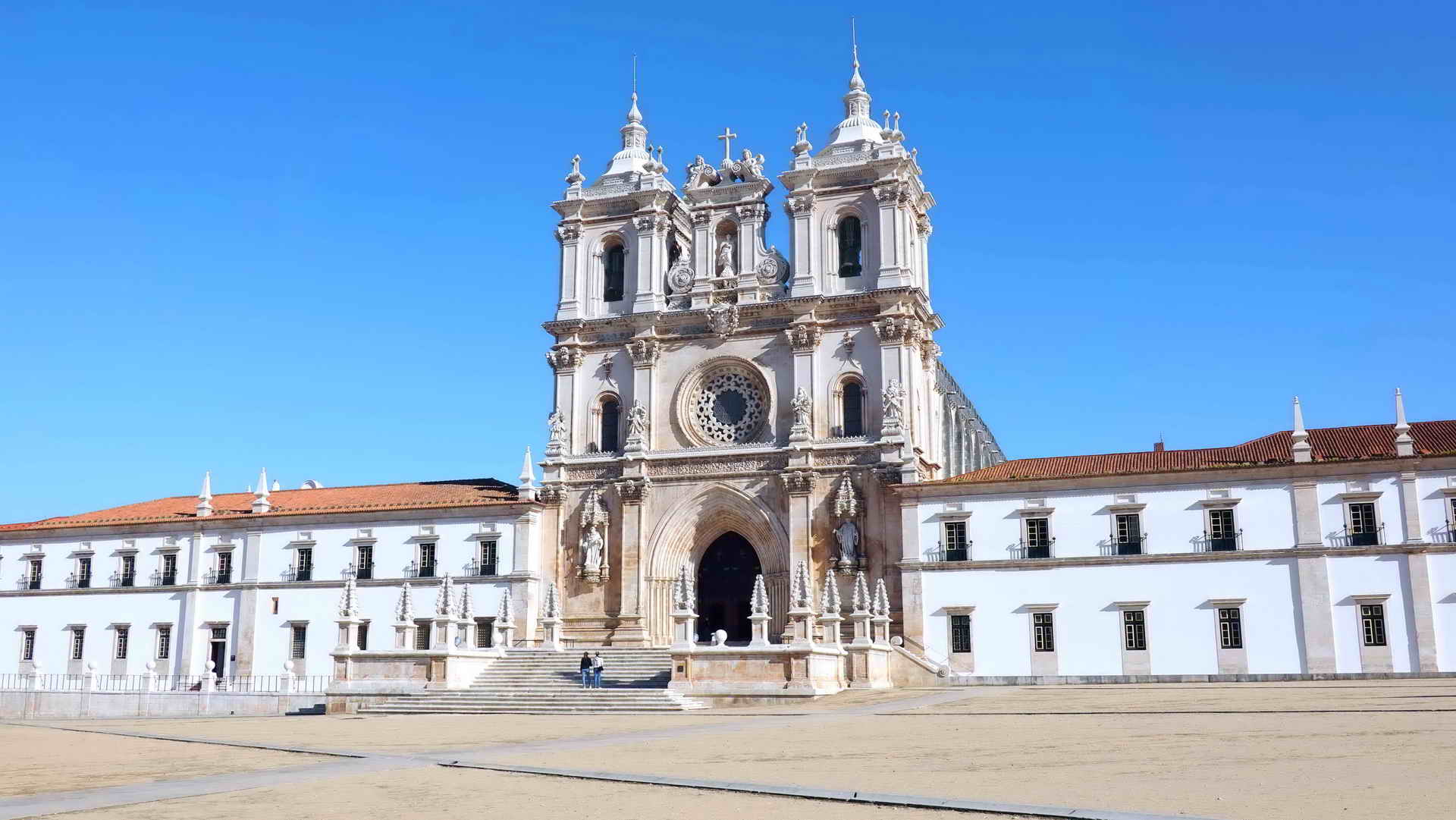 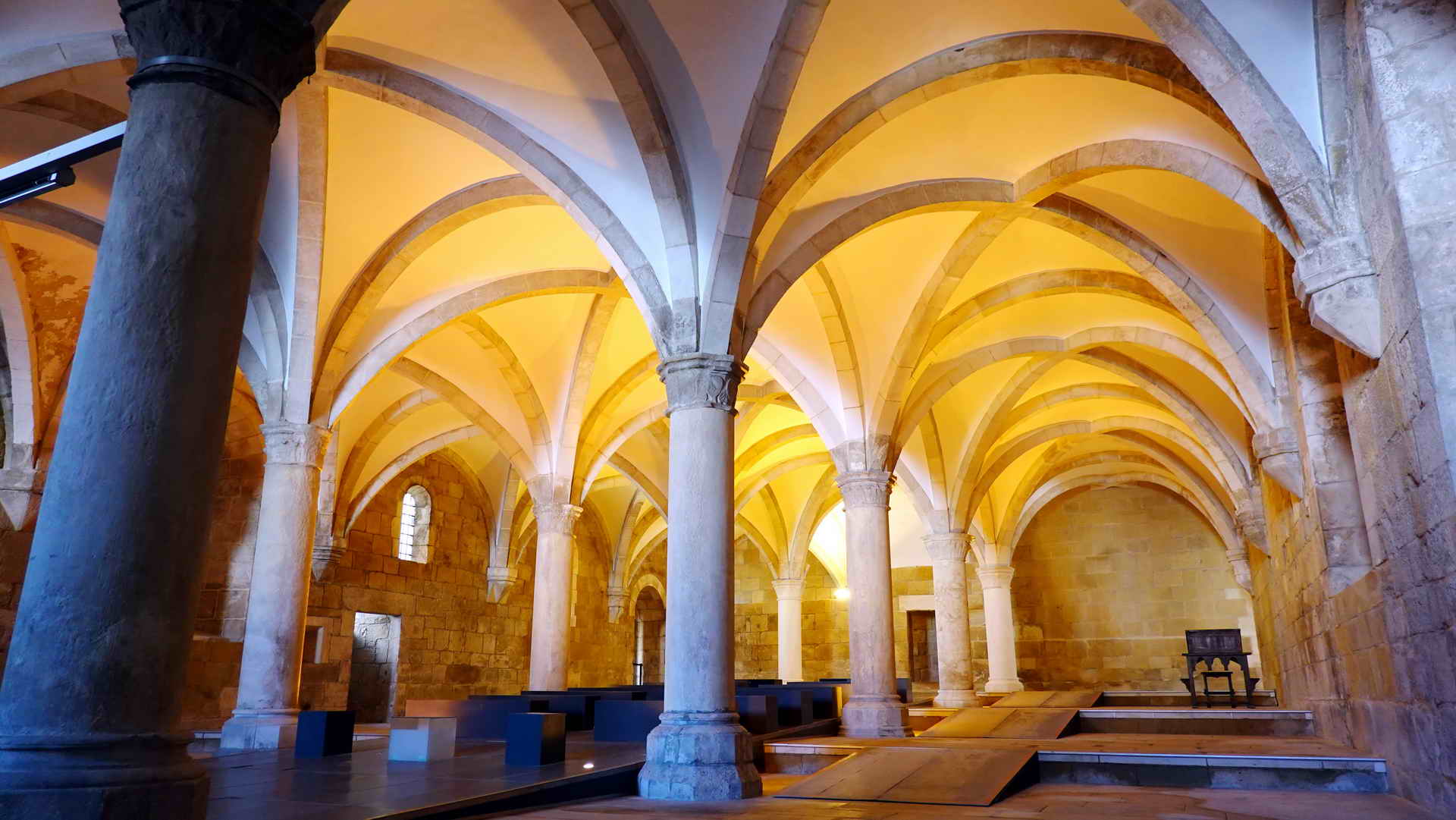 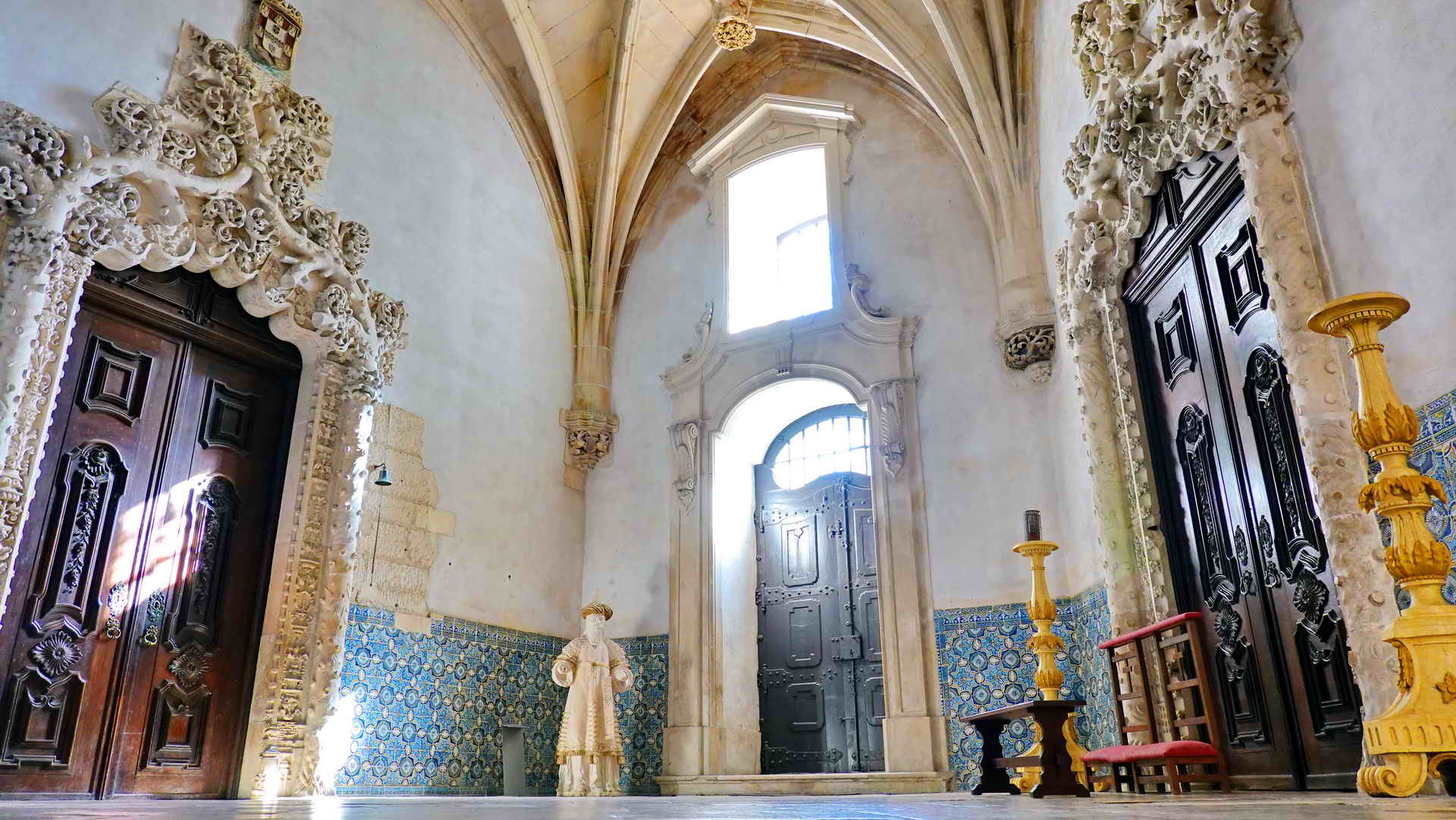 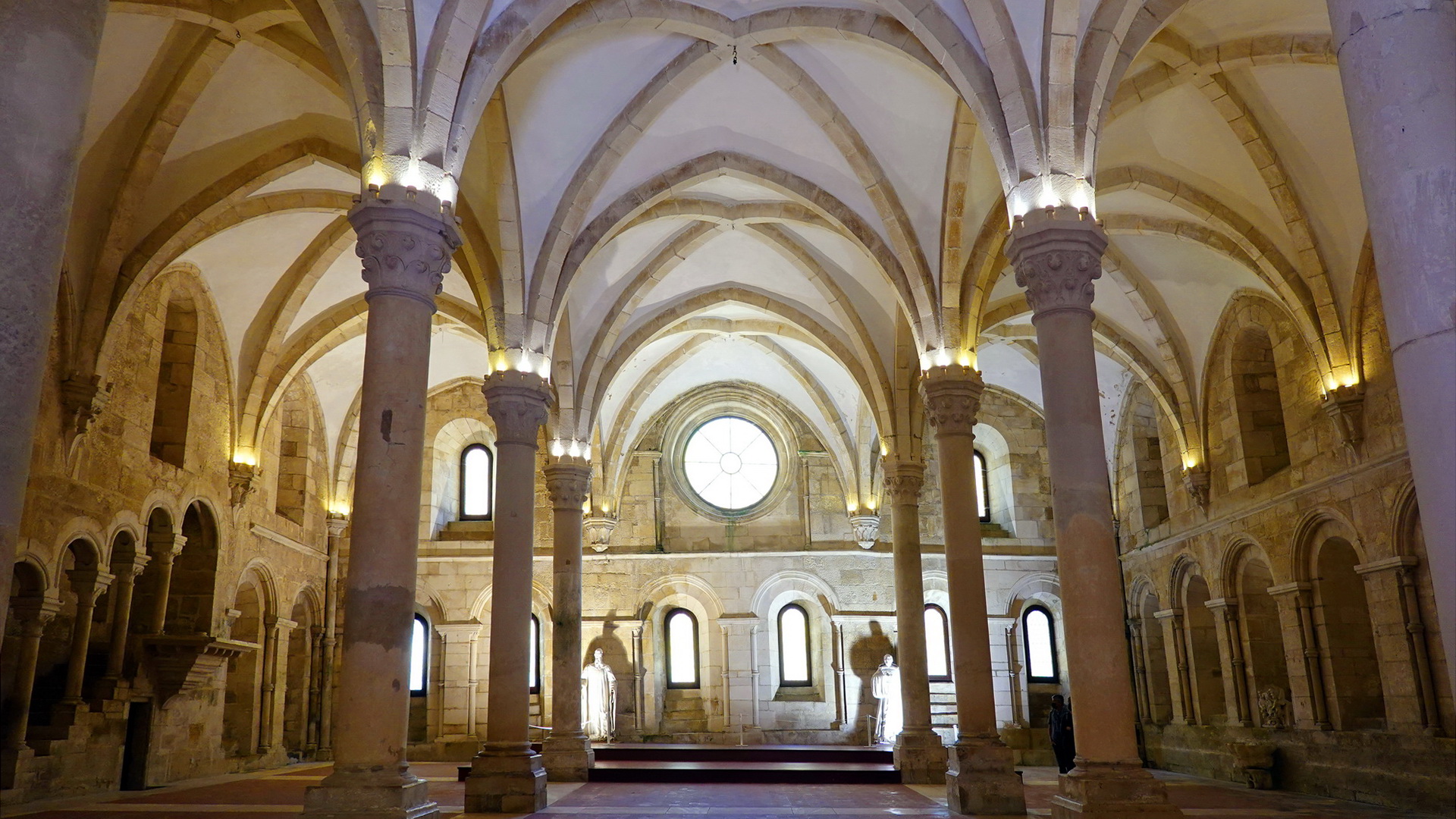 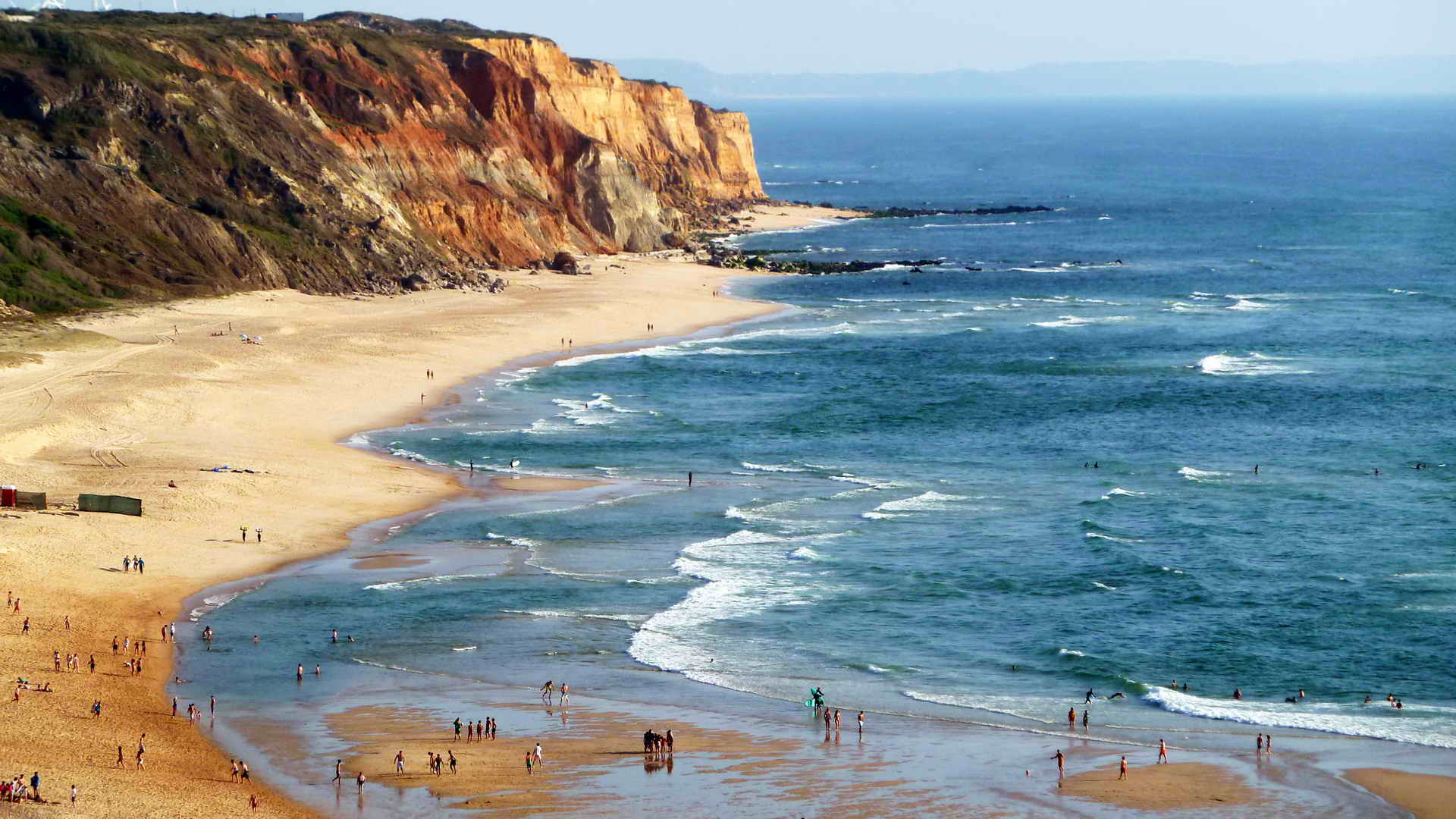 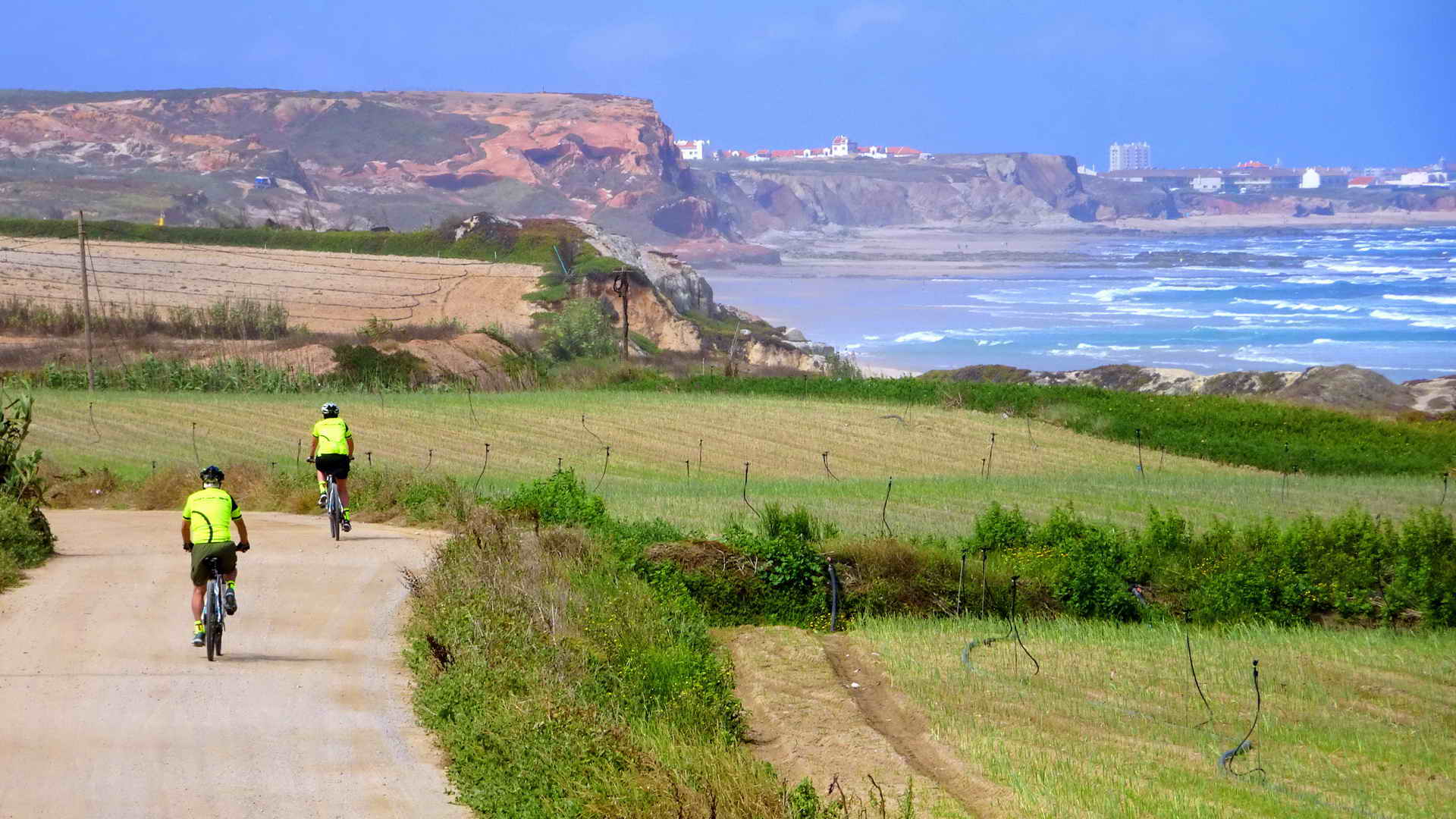 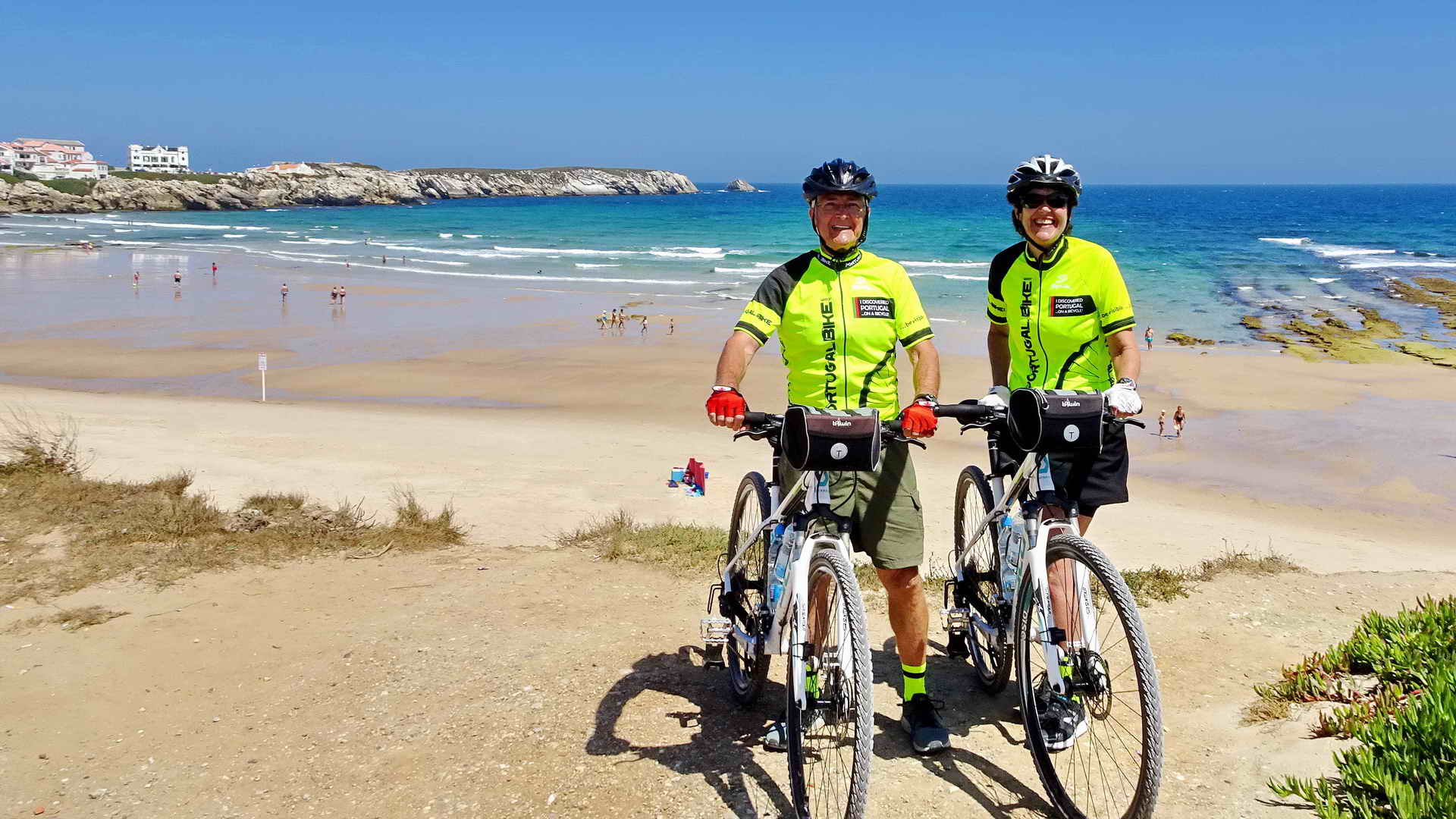 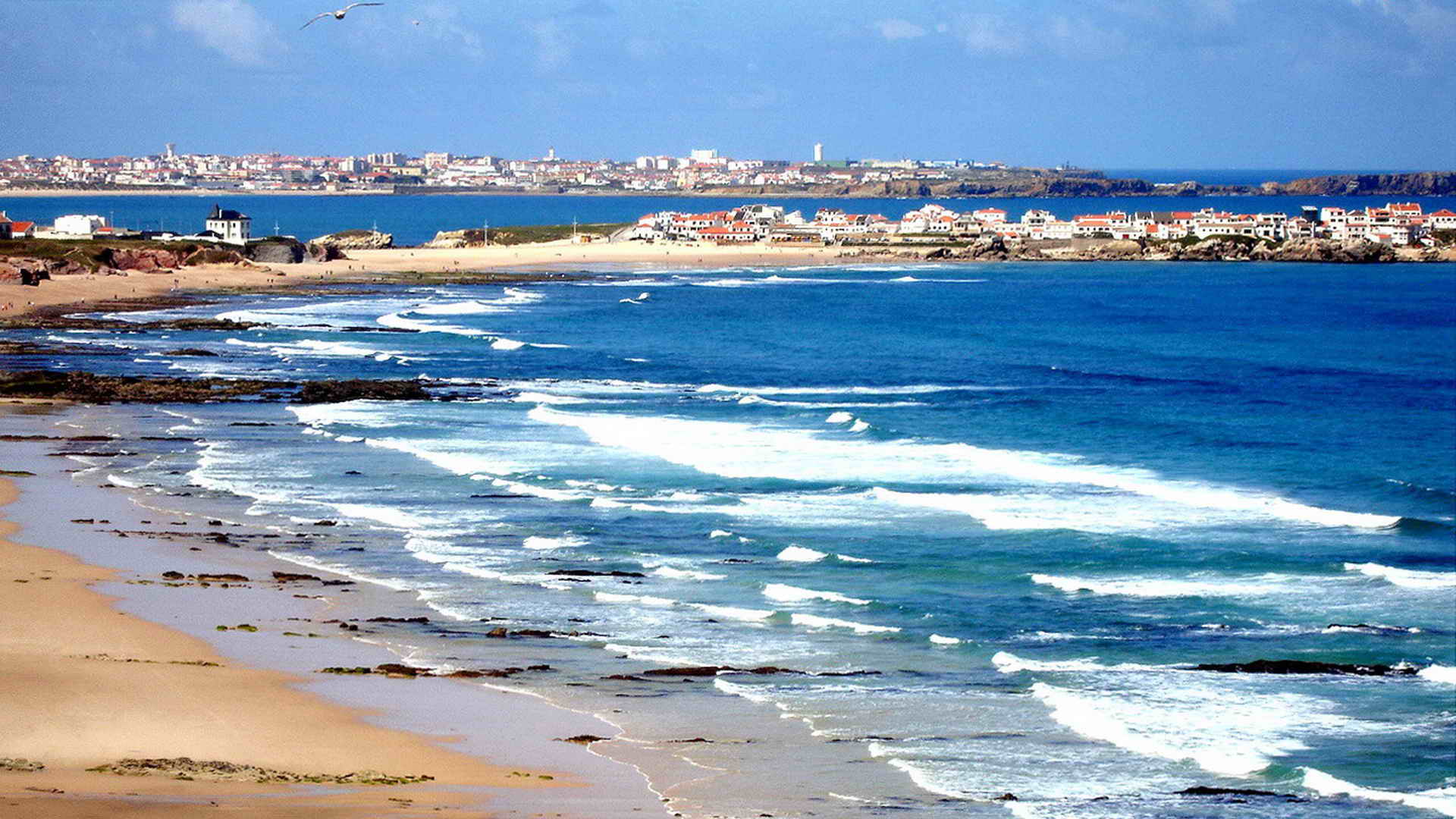 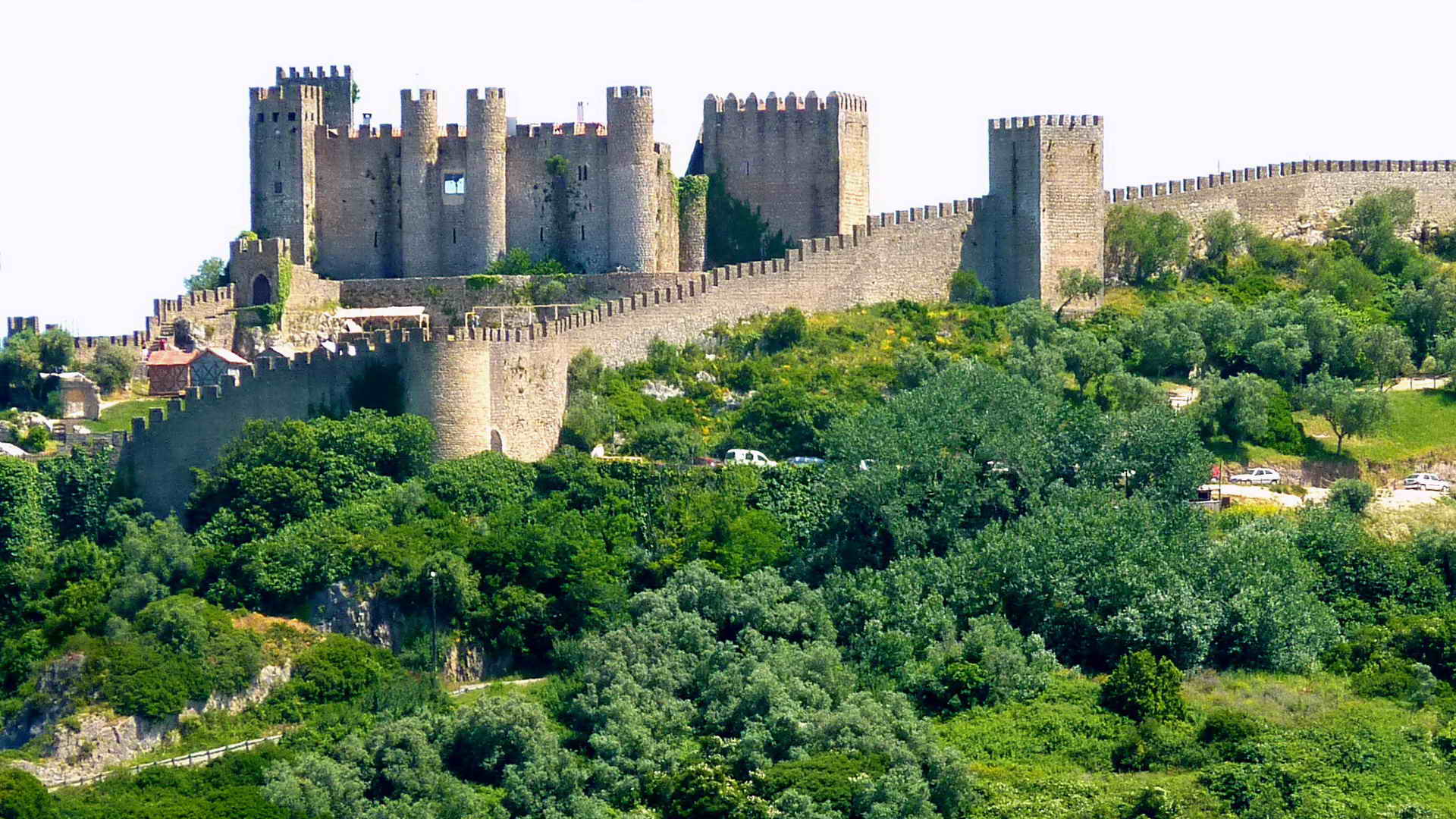 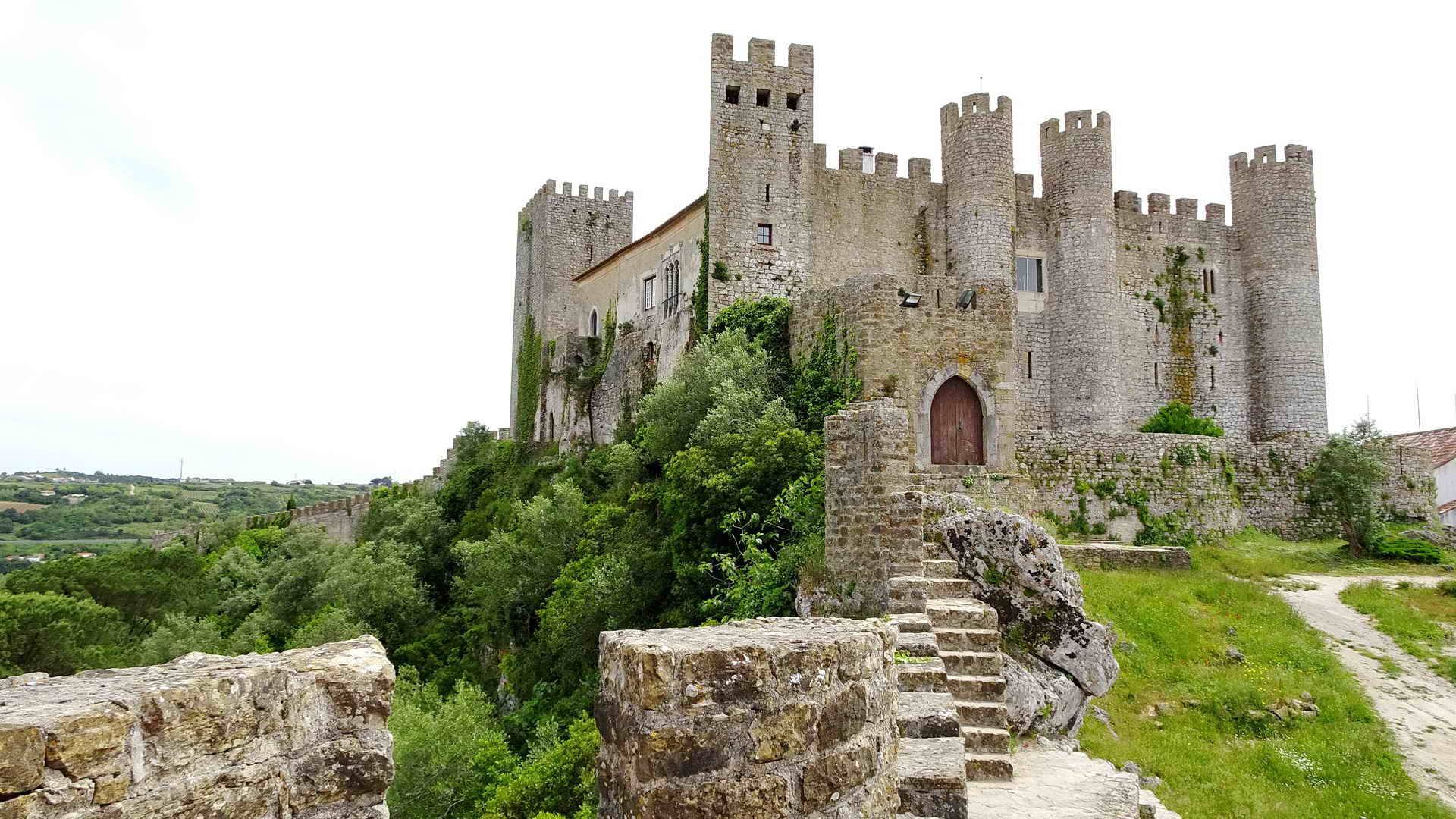 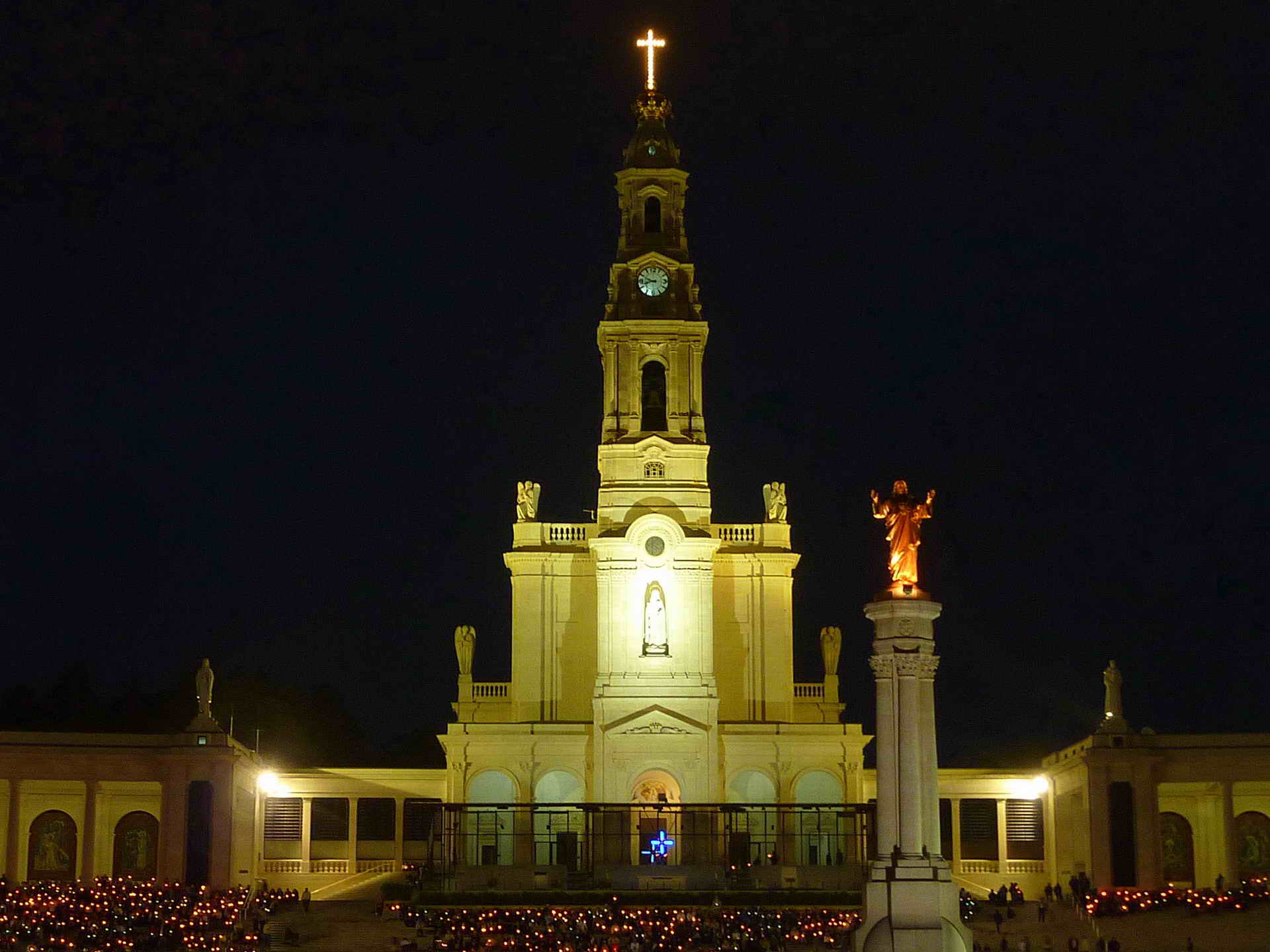 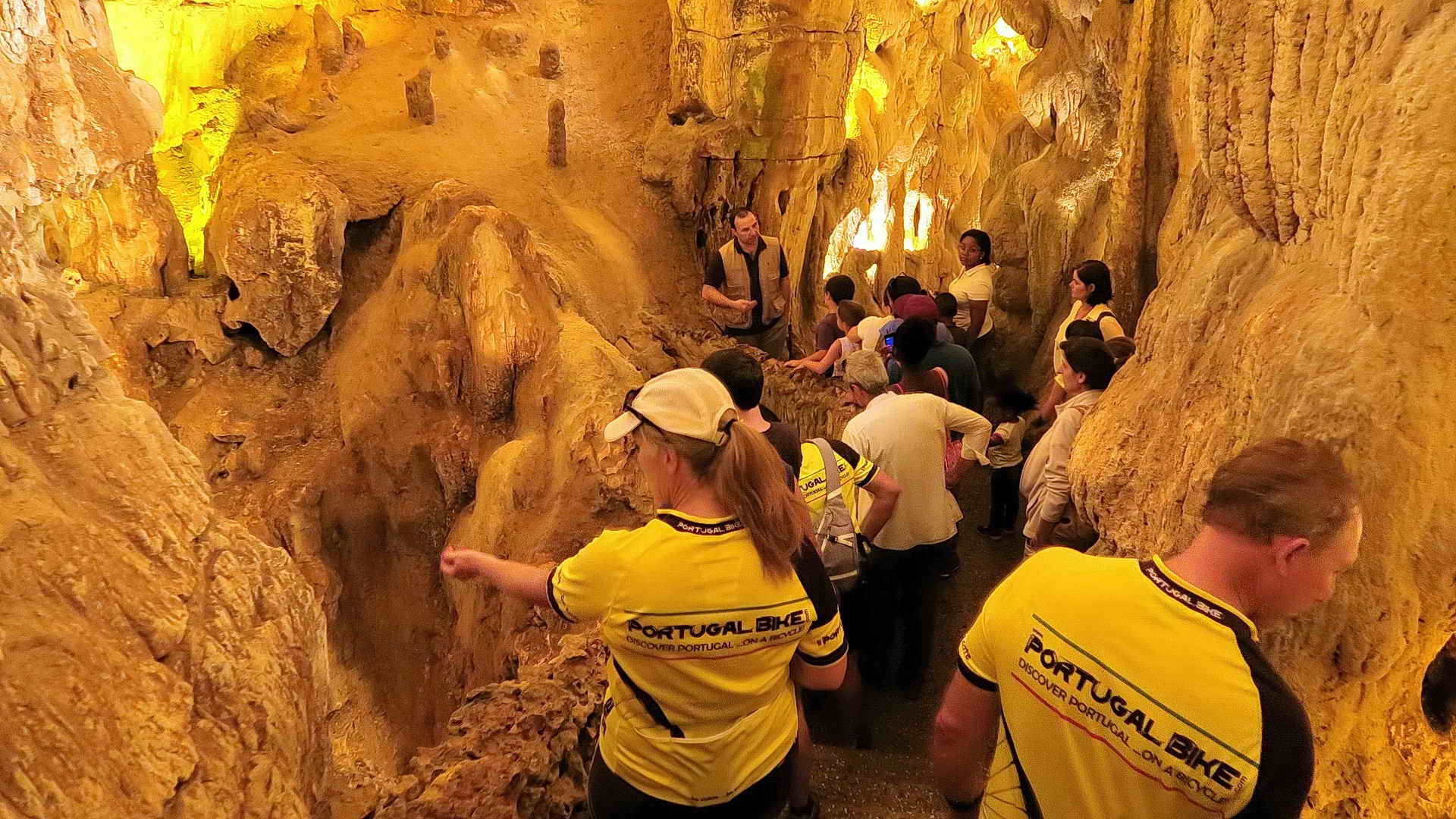 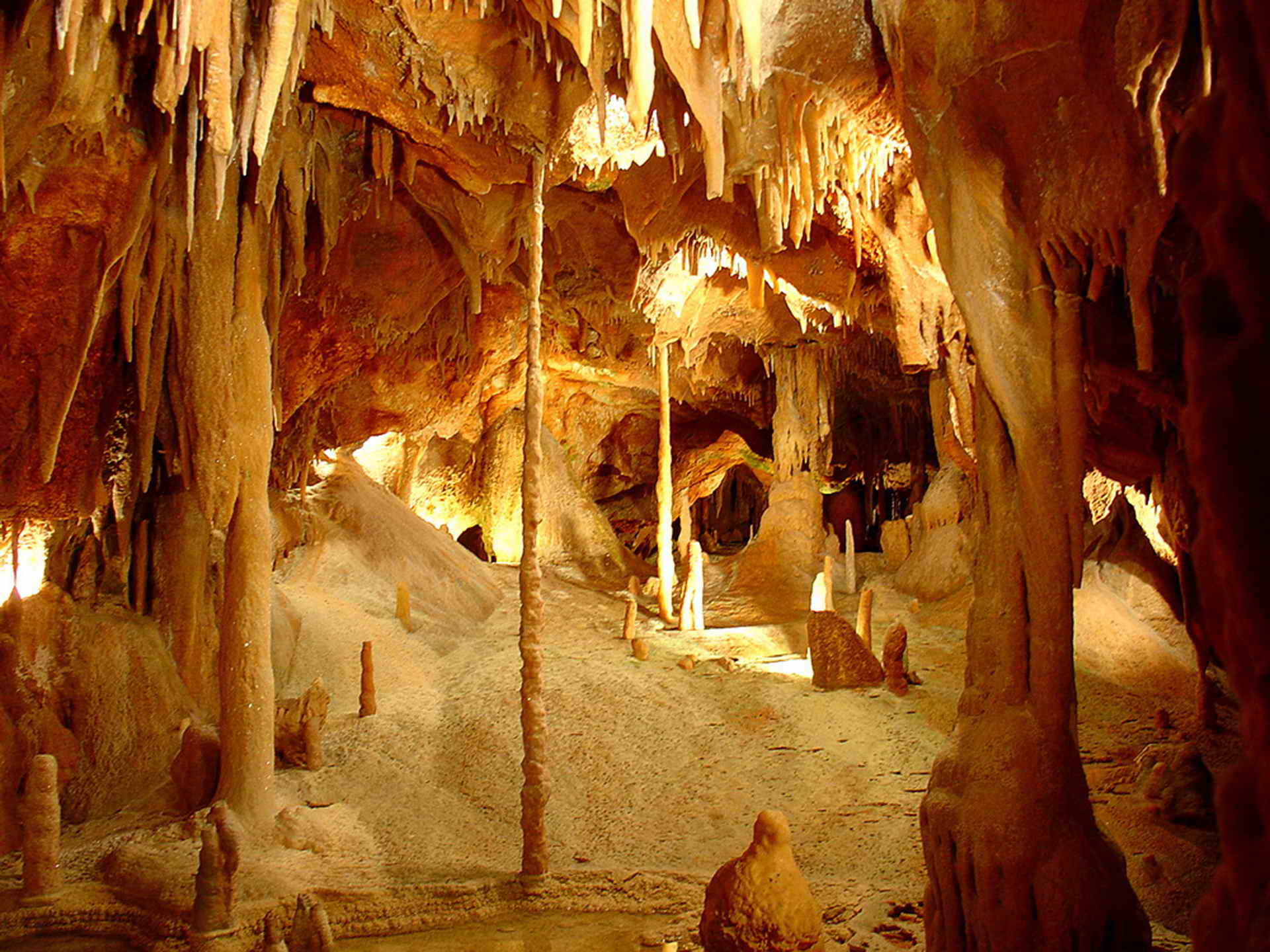 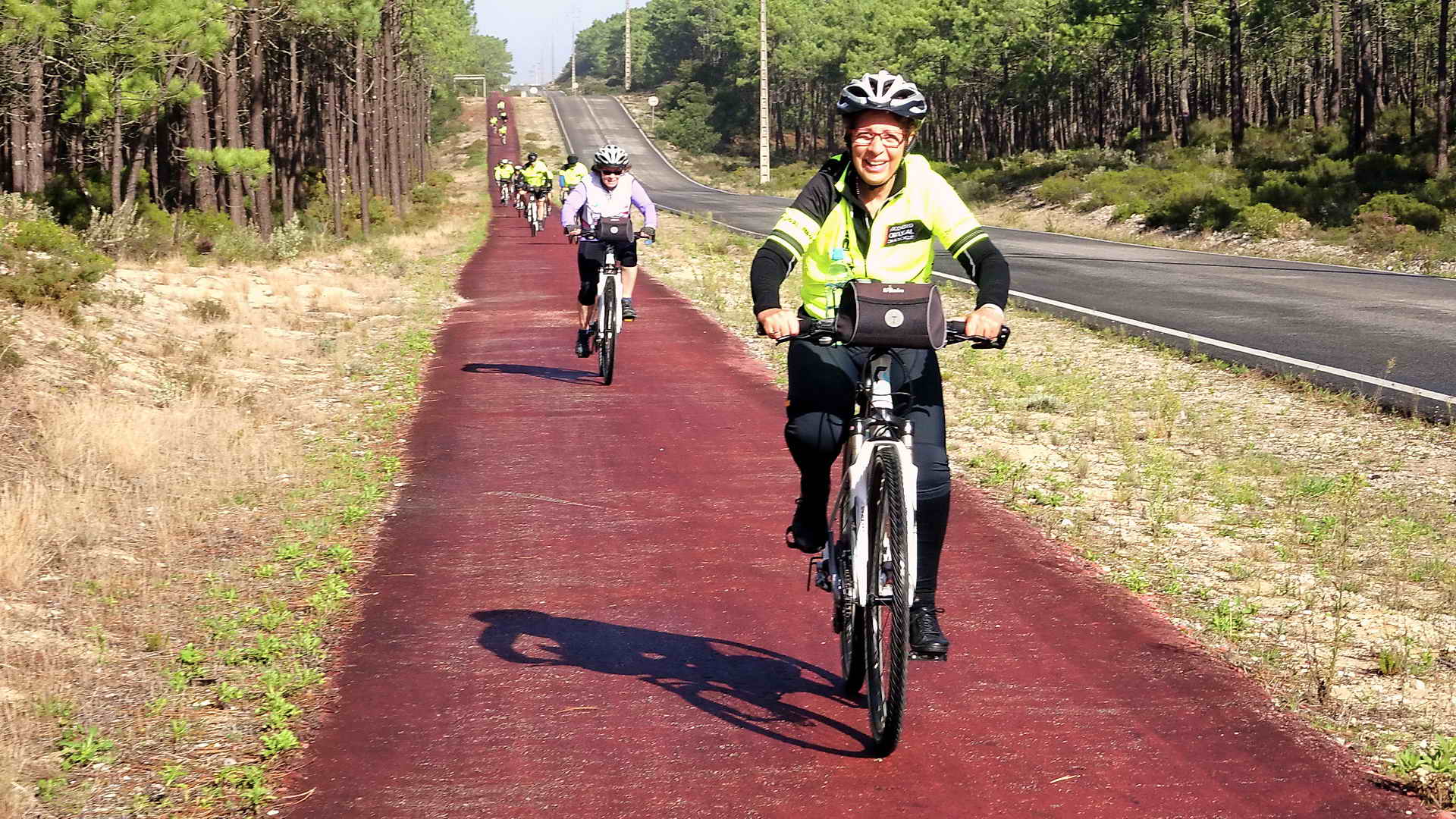 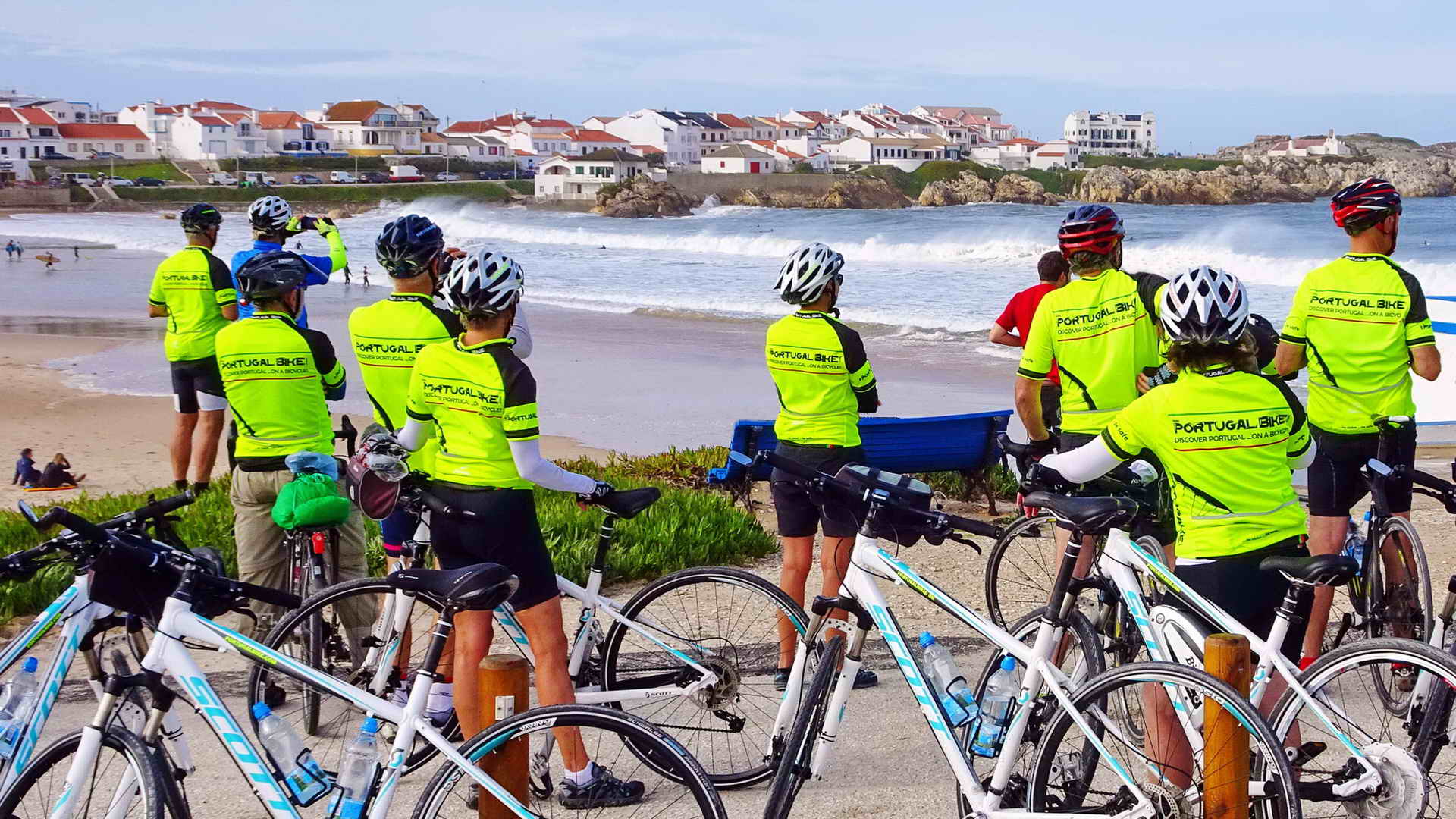 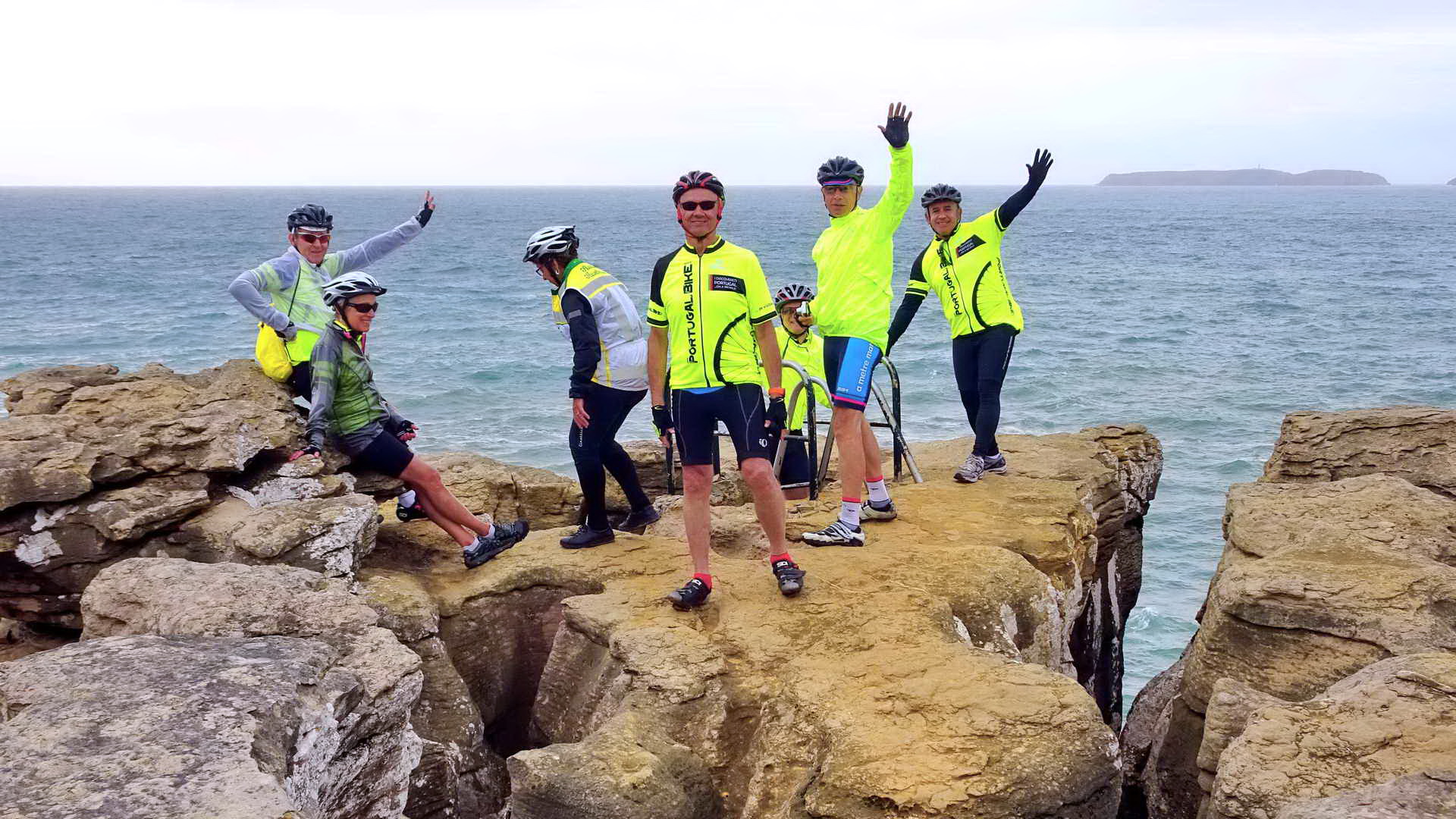 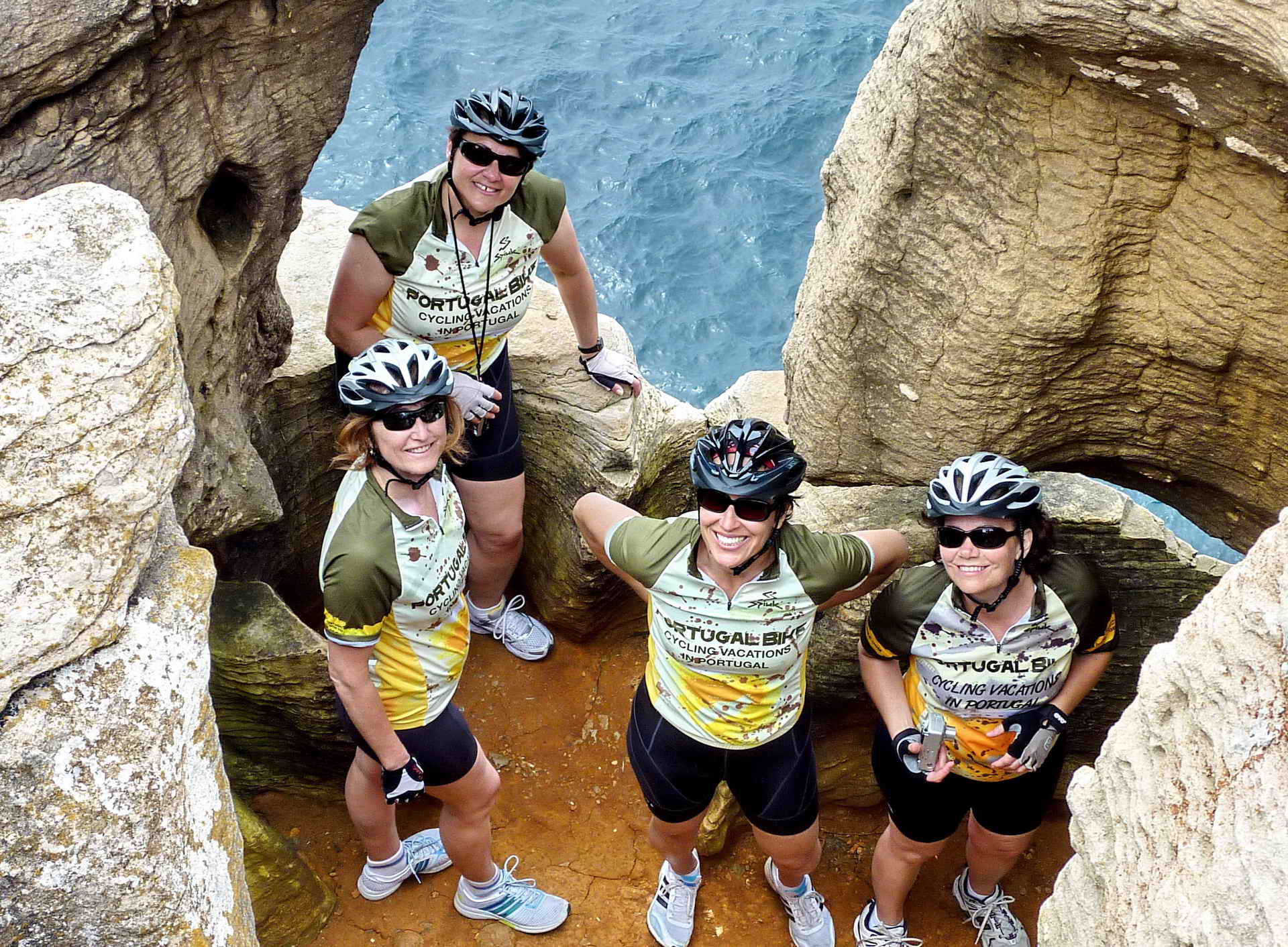 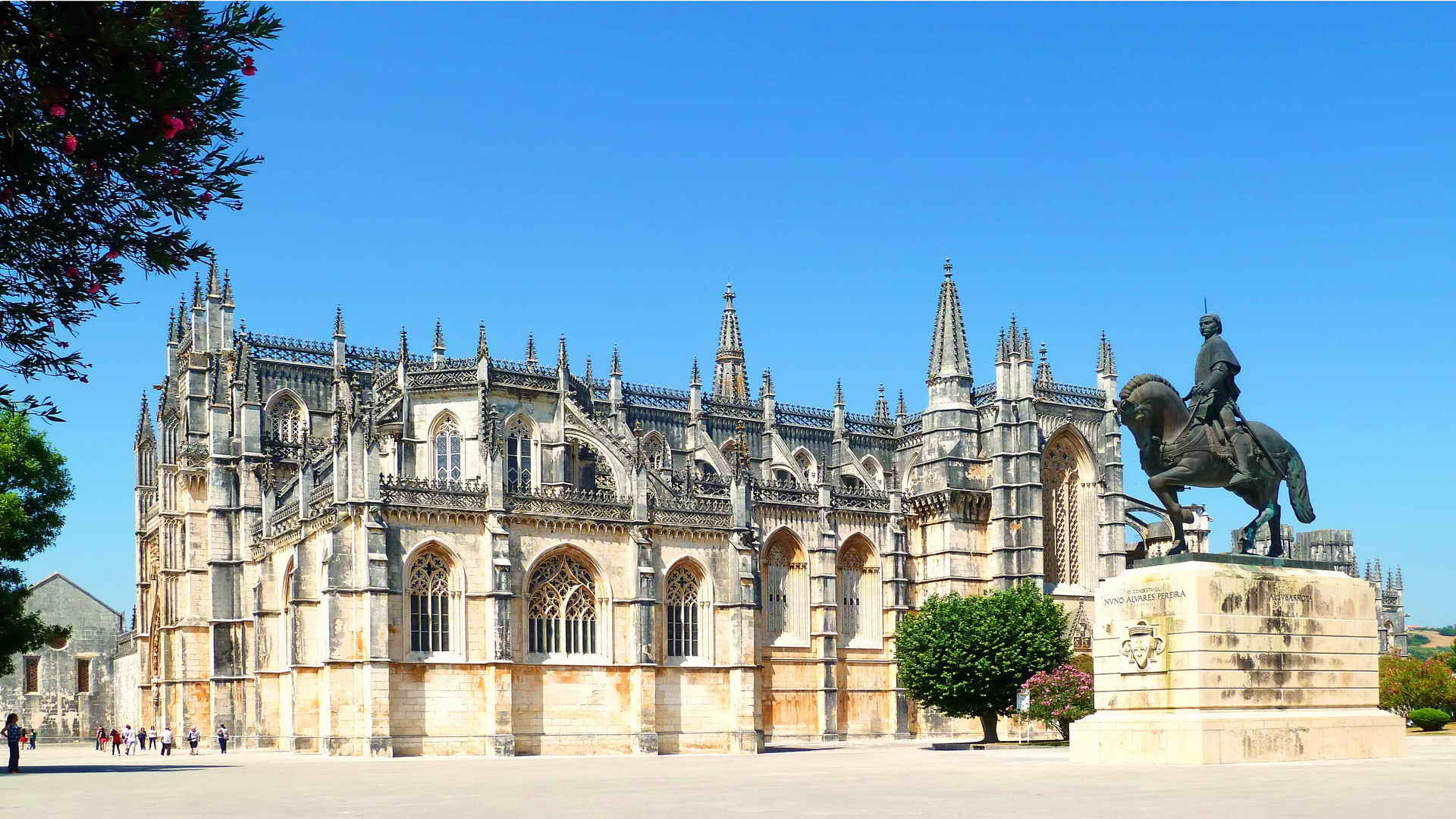 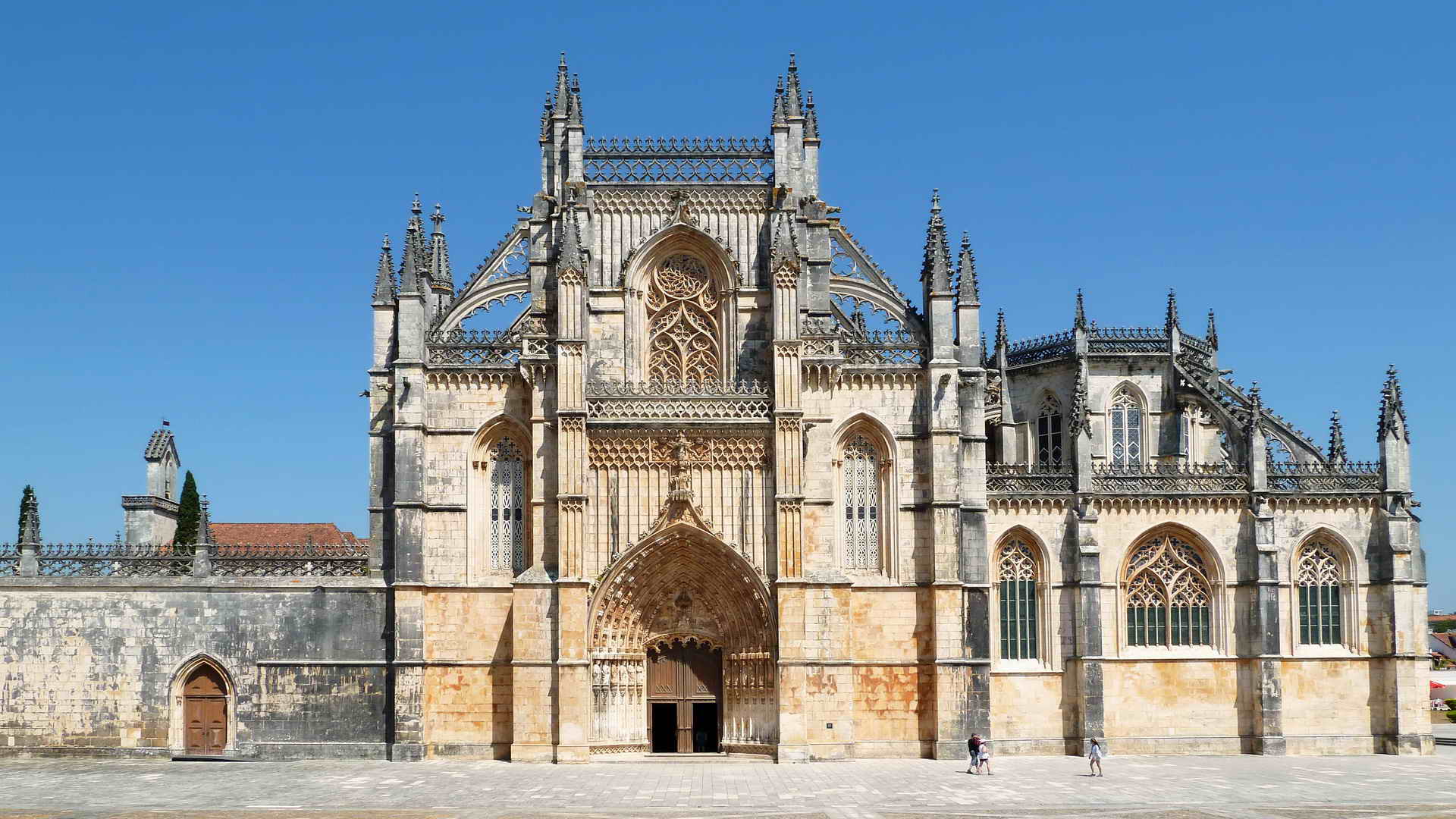 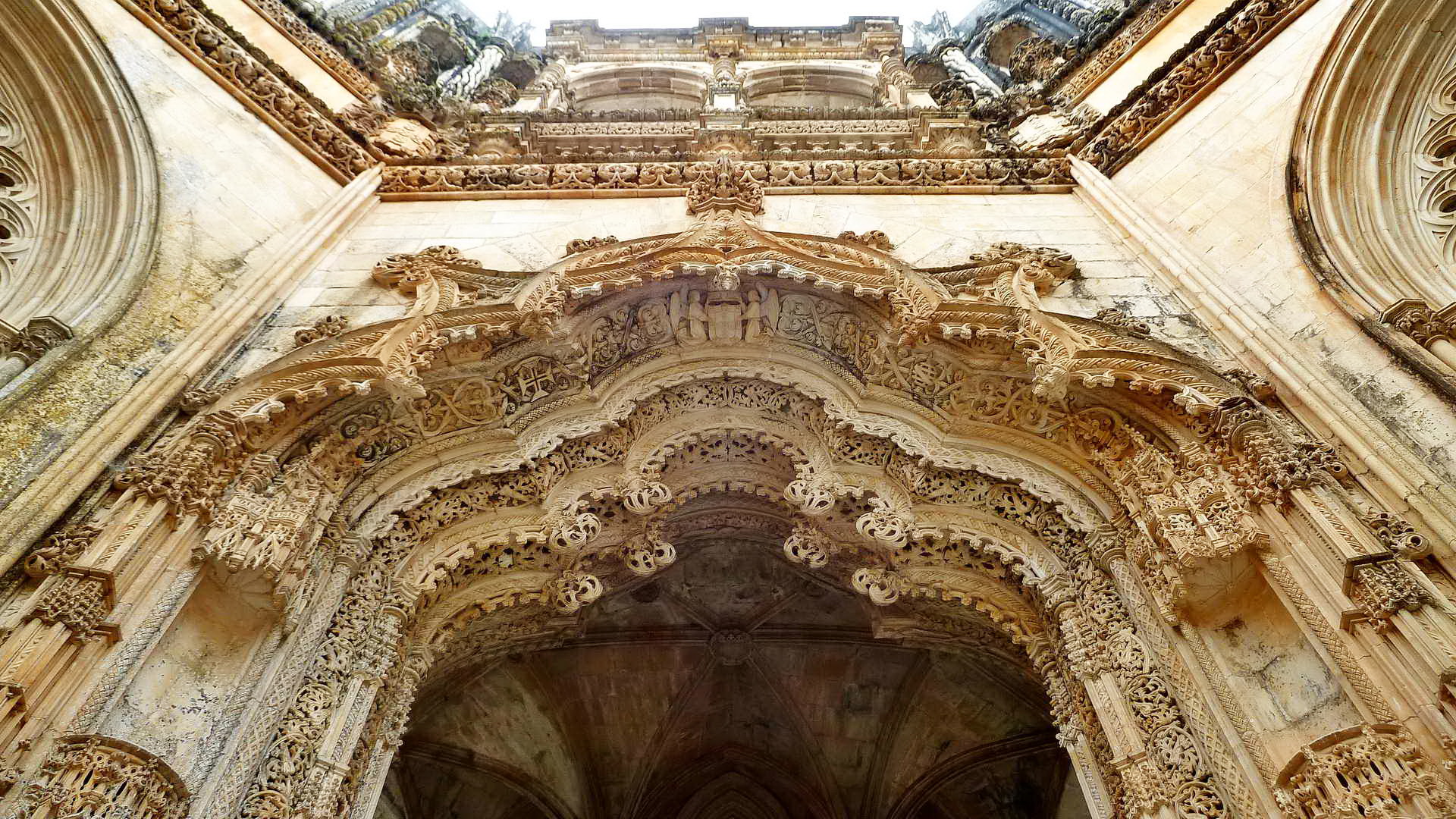 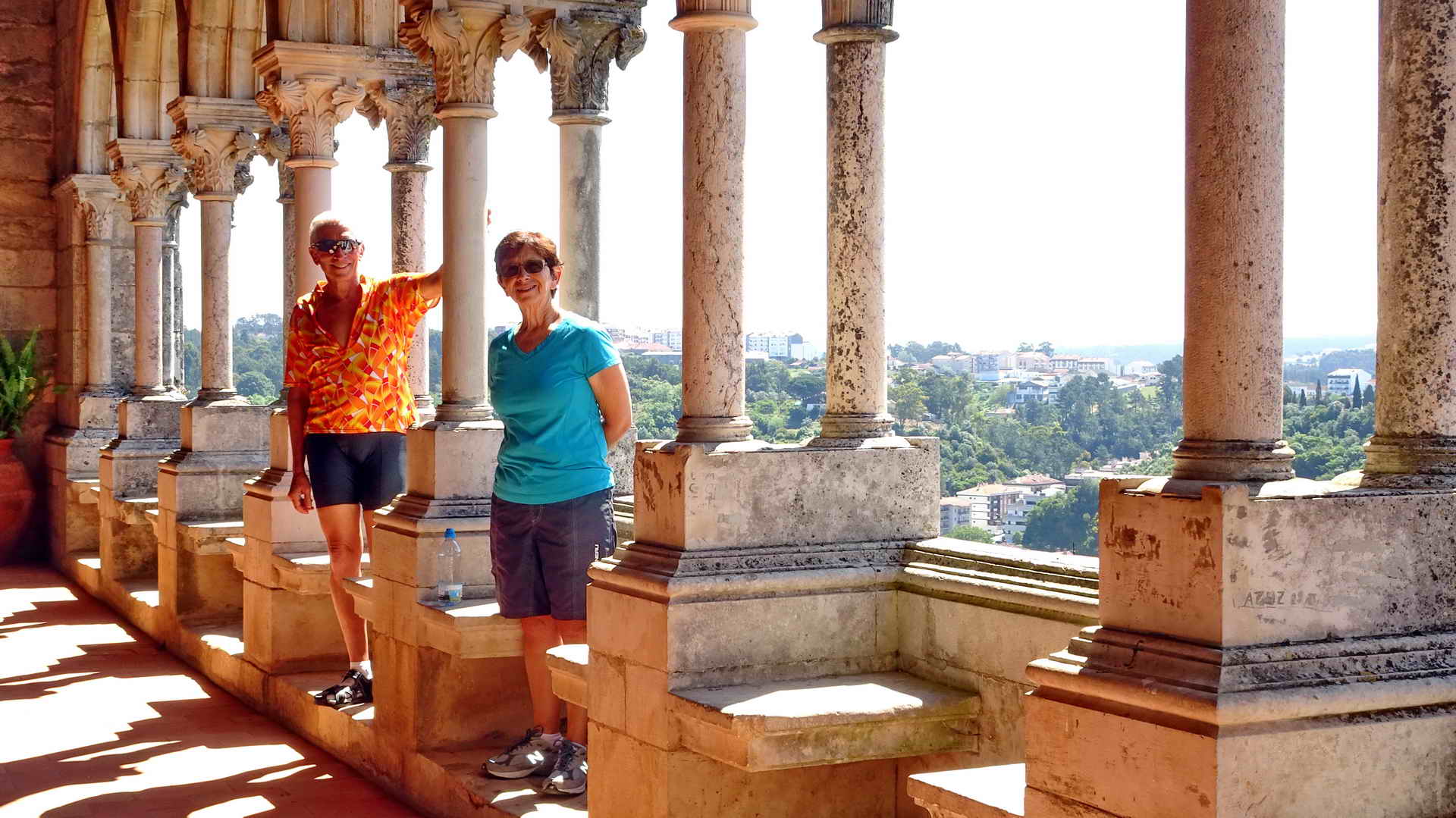 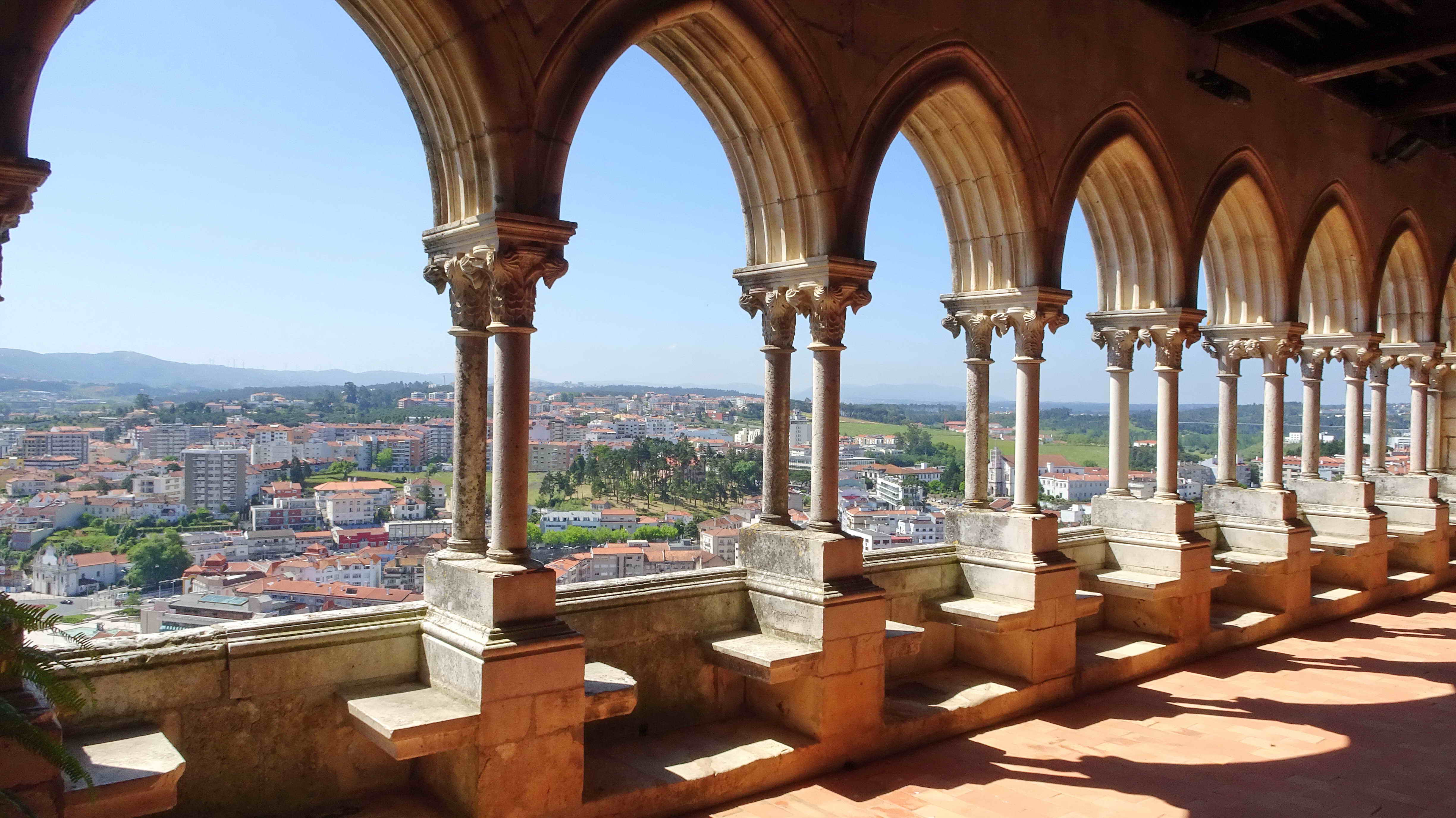 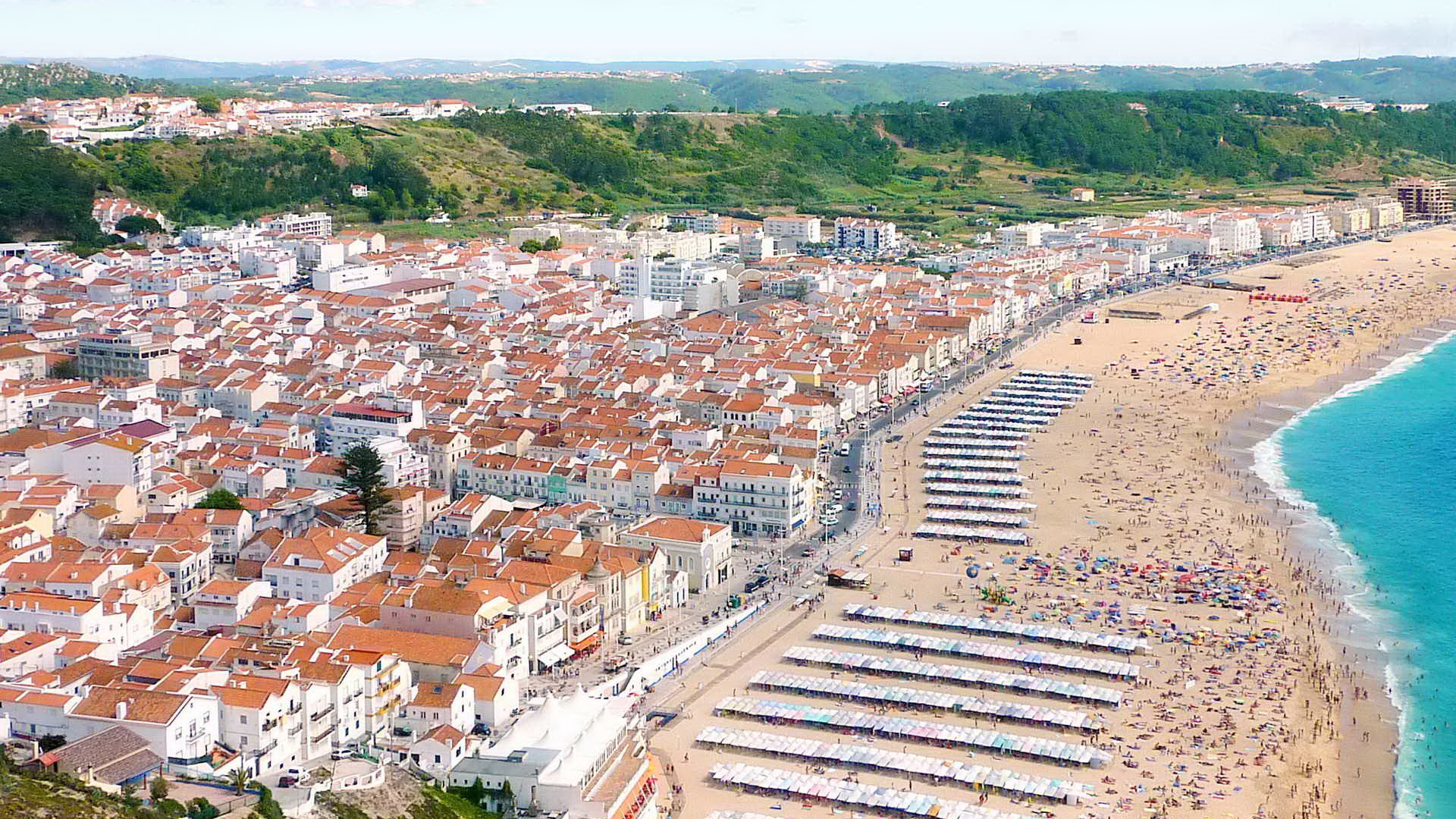 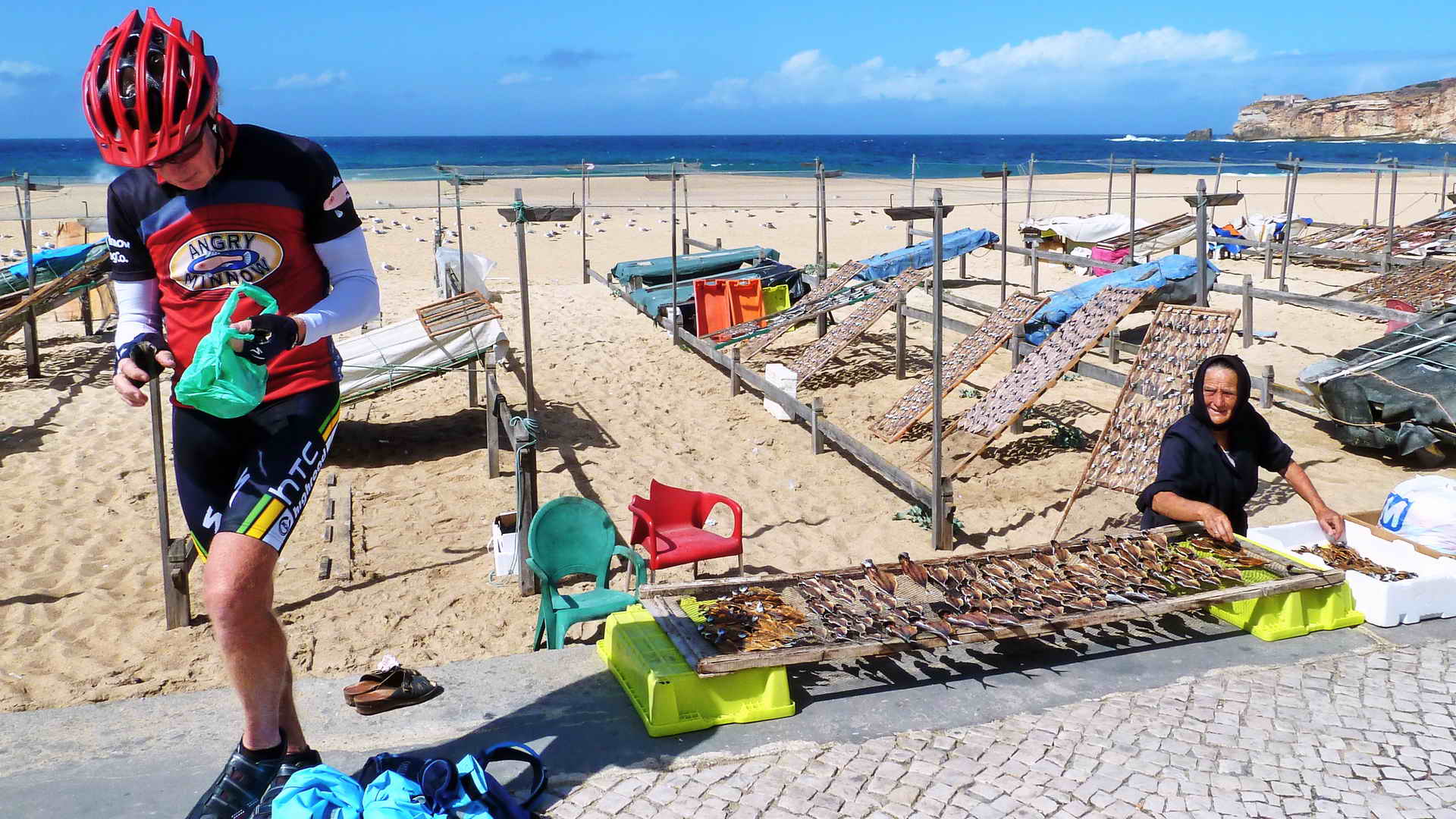 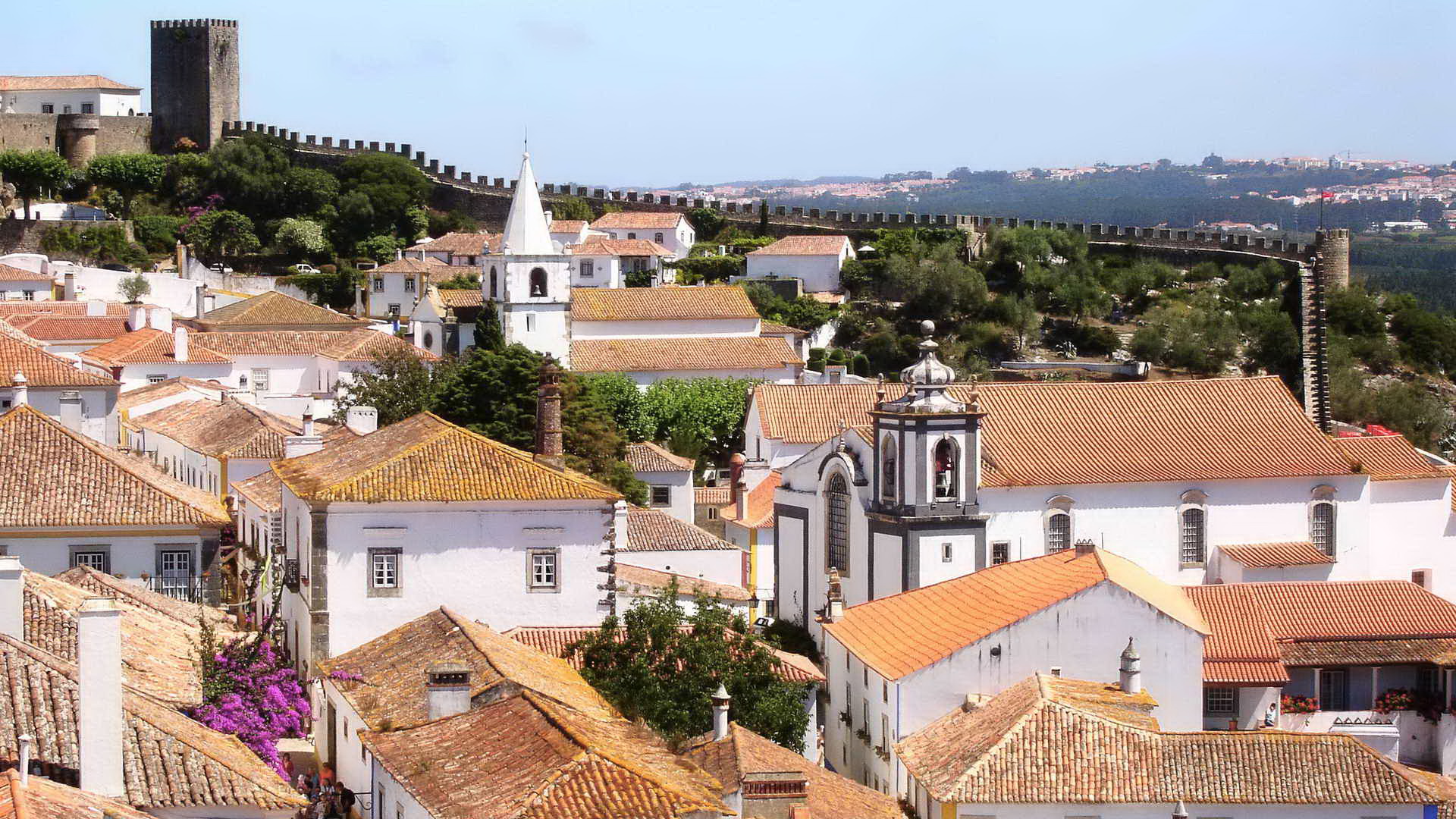 Welcome at Lisbon airport. One-hour and 30-min drive to Fatima, briefing about the tour. Lodging in modern 4* hotel located very close to the Sanctuary. Lodging in Hotel Santa Maria.

Towards the Silver Coast

44km (27mi), total climbing 510m (1670ft), level 3 (2.5).
After breakfast you leave the History of this small town to visit another impressive 12th century Castle (visit included only on Guided and Supported versions). You continue pedaling but now towards the Atlantic coast that is known as the Portuguese Silver Coast, because of the reflection of the Sun on the sea at the end of each day and the sunset. Lodging in a cozy 4* hotel in front of the sea and near to the beach. Lodging in Hotel Mar e Sol & SPA.

The most traditional beach in Portugal and the Monastery

46km (29mi), total climbing 500m (1640ft), level 3 (2.6).
After breakfast you cycle along a beautiful cycle lane with a gorgeous pine forest and sea view that takes you to the most typical fishing village in Portugal where the fishermen work their nets at the beach and dry the fish under the sun. Before you get to the next hotel you visit another impressive Monastery, from the 12th century (visit included only on Guided and Supported versions), and that is classified as a World Heritage site by UNESCO. Lodging in a beautiful 4* hotel in the countryside. Lodging in Your Hotel & SPA.

51km (32mi), total climbing 660m (2170ft), level 3 (3.0).
You ride towards the Portuguese Atlantic coast again and the day includes gorgeous sea sceneries and beautiful beaches. Finally, you get to the most well-preserved medieval town with its narrow and winding roads and its whitewashed houses and the castle at the top. Lodging in a charming 4* hotel near the historic center whose building is dated from the 14th century. Lodging in Josefa d’Óbidos Hotel.

48km (30mi), total climbing 500m (1640ft), level 3 (2.7).
After breakfast you ride along amazing bike paths along the lagoon and you cycle to a two-sided beach (north and south sides) and finally the Peniche peninsula with its amazing rocks shaped by the sea and the wind. Note the big difference between the north side and the soud side of the coast of this peninsula. Lodging in a new 4* hotel, MH Peniche Hotel.

After breakfast transfer to Lisbon airport  (1-hour drive to Lisbon). 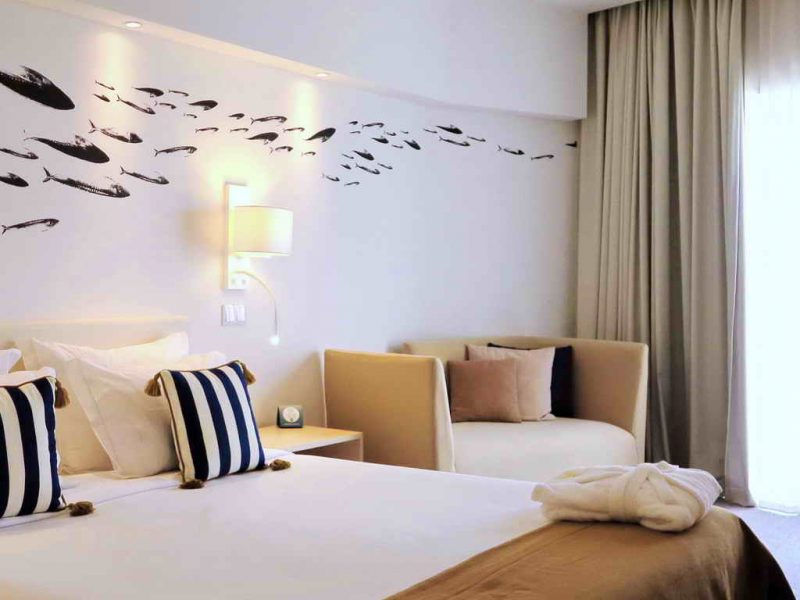 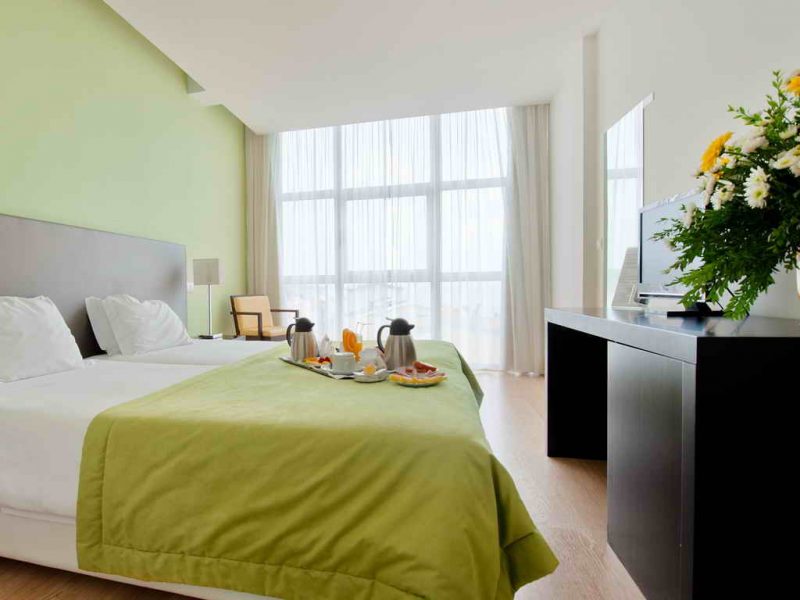 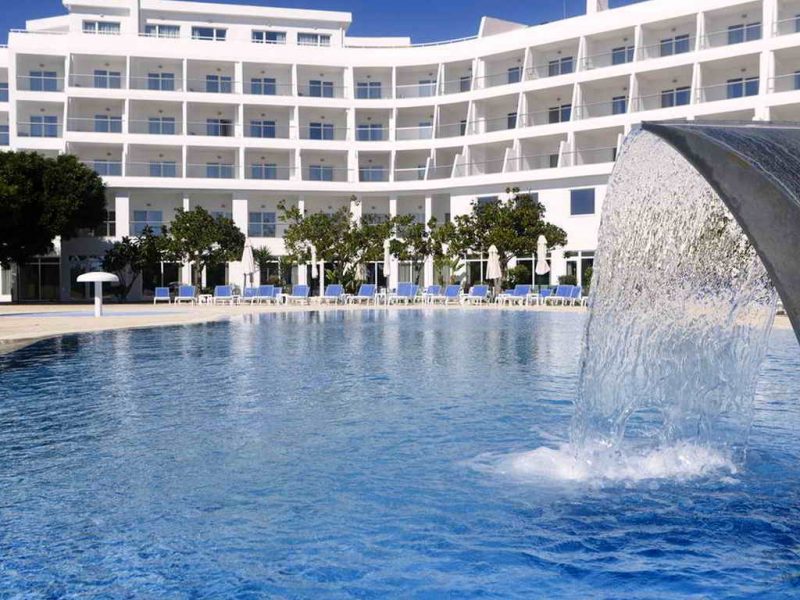 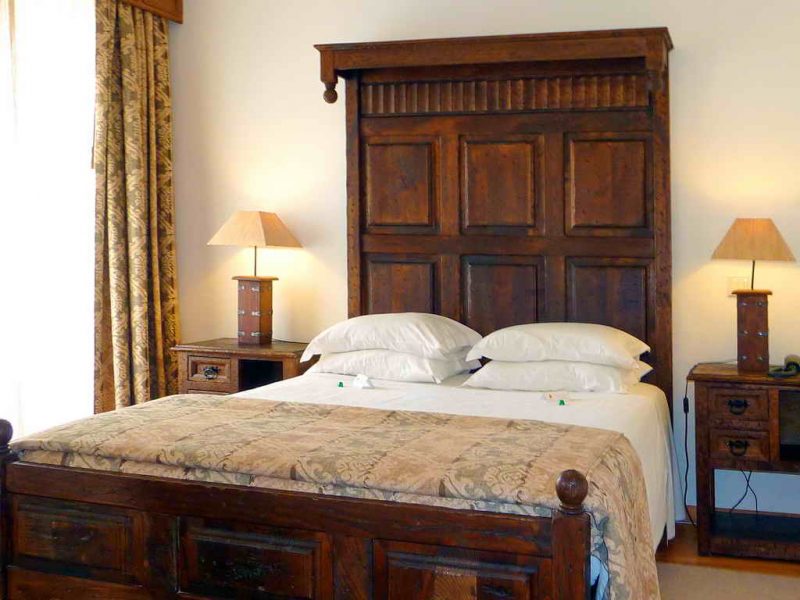 Or other Easy Hybrid Bike Tours on the Coast

“This was our first Supported bike trip and Portugal Bike exceeded our expectations! The organisation was superb and everything was top quality – bikes, GPS, routes, accomodation. Our guide Andre was a pleasure to deal with, very informative about Portugal and its history and did a fantastic job looking after us.
If you are looking for a cycling trip in Portugal look no further, Portugal Bike are the best. We will definitely be back!!”

“Bike tour in Portugal: steep hills, strong winds, speedy yet courteous drivers, all around sunshine, boa vistas & great company! We were so happy & thrilled with the support we received and the perfect weather we experienced.
We found the Portugese people to be warm and friendly and the food fantastic! The beaches were pristine & the country’s use of recycling – and solar and wind harnessed power – was evident and much appreciated!
Cristina & Jose & crew run a top-notch company – very professional with authentic cyclists on its crew. Their History, Heritage and Coast tour on hybrid bikes was a perfect mix and within my novice capabilities. With Gratitude to our most awesome guide & support cyclist ‍♂️ with Bike Portugal tours, Ricardo!! He is the Best!!”

“My wife and I just completed the History, Heritage and Coast tour with Christina and Jose. The tour covered inland and coastal areas just north of Lisbon. We thoroughly enjoyed the tour made special by our hosts, and their friendliness. Hotels, B&B and areas biked were charming, and the great food was representative of the areas visited. My wife loved the e-bike assist, which helped her climb the Portuguese hills. If you like biking, countrysides, wonderful scenery and the relaxed, friendly nature of our guides, don’t hesitate to sign up.”

“Thank you for the best vacation ever. (…) I am so impressed with your company and I am telling everyone; you were tour guides, personal trainers, translators, concierge, taxi, caterers, historians, friends and professional business operators. Portugal Bike takes care of everything, all you need to do is ride and enjoy!! Great home made lunches, excellent local restaurants, transportation and translation services you will be thrilled with your vacation. The time I spent off the bicycle was as interesting and diverse as during the ride. Portugal Bike is priceless and you (Jose and Cristina) are a pleasure. Spending a week with 2 total strangers and trusting their judgement was a concern of mine before selecting my trip. I recommend you both on your character and integrity; you are both excellent people (personally and as business owners). I HIGHLY recommend this trip to everyone and anyone who has a pulse and a desire to see a beautiful country. By bike, land and van, ocean coast, cliffs, beach, caves 45m under, castles, farms, countryside villages, vacation hot spots, fancy hotels, sheep herds and my favourite – Obidos, the city inside the castle walls, it’s amazing. Thank you again for everything!!!!”

“The tour “History, Heritage and Coast” lived up to its name as we rode along beautiful scenic stretches of ocean (from a height of course). The quaint villages and fields of flowers and crops were additional views of Portugal that I was so glad to be seeing close up by bike. I kept running out of batteries due to the number of photos that just had to be taken in Óbidos. We felt spoiled by Jose & Christina who took care of all our needs from picnics and snacks to great dinners and wonderful accommodation. They were knowledgeable and personable and have set the bar high for biking holidays. Even before the tour was over we were discussing the details of our next trip with Portugal Bike! Thanks for the wonderful holiday in Portugal.”

“In September 2015, my wife and I and three fun-loving Irish ladies cycled the History, Heritage & Coast guided bike tour. The hybrid bikes were state-of-the art, and the rides were safe, interesting, varied and very enjoyable. Our superlative guide, Jose, provided us with informative historical and environmental insights, while detail oriented Cristina organized our transportation, lodging and outstanding meals. The whole operation was professionally run with a caring and friendly approach, providing for a quality experience. Overall, we can’t say enough positive things about out trip and would highly recommend Portugal Bike tours.”